This was one of my most-anticipated documentary of the year, so when it played at TCFF in October I was beyond thrilled. I had never seen eagle hunter doing their thing on screen, let alone an eagle huntress. It’s a world rarely explored on films, and for that reason alone I was excited to see it.

The Eagle Huntress follows Aisholpan, a 13-year-old girl, as she trains to become the first female in twelve generations of her Kazakh family to become an eagle hunter. It seems apt that the documentary is narrated by Daisy Ridley, the bad-ass star of Star Wars‘ spinoff The Force Awakens. Within minutes, I was in awe of the beauty of the Mongolian landscape. This is perhaps one of the most beautifully-shot films I’ve ever seen, not just of this year. Not sure what the production budget was, but it certainly looks extremely-well made. I’d jokingly call it eagle-porn for all the stunning sequence of the majestic bird flying in the air, but the most incredible shots are during Aisholpan’s training to catch the bird.

As the title role, Aisholpan effortlessly won my heart. She has such a great screen presence and charming personality. Growing up in a patriarchal community in a nomadic family, she’s very close to her eagle-hunter father, who often takes her eagle hunting. It’s no surprise that she wants to follow in his footsteps and despite the objections of the community elders who insist that eagle-hunting is a man’s job, her dad fully supports her. If you’re a parent, especially dads, this is a great film to take with your kids. The relationship between Aisholpan and her dad is genuinely heart-warming.

A key scene when Aisholpan and her dad had to snatch a 3-month-old eagle chick from its nets up high in the mountain is quite an adrenaline rush. Aisholpan’s dad literally had to dangle his daughter on a rope over a cliff during a particularly windy day. I’d imagine it’s a tricky job even for a man, let alone a young girl! But Aisholpan defied the odds and she proved the naysayers wrong time and time again as she also triumphed in eagle-hunting competition. But what I admire about Aisholpan is not just her talents and tenacity. Despite being a bit of a tomboy, she also embraced her femininity, as the film shows her wearing a bow and painting her nails. She thrives in a man’s world but she’s still very much a girl and enjoys being one. 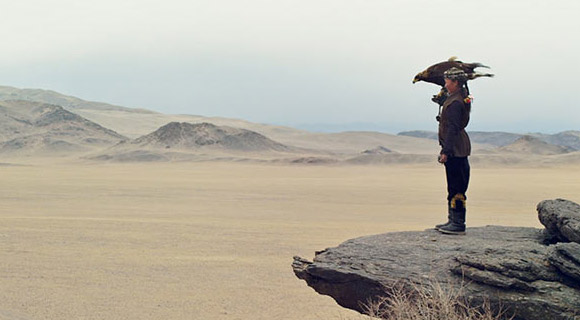 A good documentary immerses you in an exotic world that’s completely foreign to you and The Eagle Huntress certainly did that for me. I love the moments between Aisholpan and her eagle (the one she caught off the cliff) and how she’d talk to her the way a kid would talk to their pet cat or dog. There’s also scenes of her with her girlfriends, most of which don’t exactly share her passion for eagle hunting. It’s truly an insightful, entertaining and emotional experience watching this movie. Apparently director Otto Bell moved Heaven and Earth’ to finish this film as he said in this TIFF interview. I’m glad he did and thanks to him we got to know such an amazing and inspiring story. Kudos to cinematographer Simon Niblett in filming the stunning mountainous Kazhak wilderness, as well as capturing some of the intimate moments in Aisholpan’s journey. They used GoPro cameras to film much of the eagle-hunting action and they’re an absolute blast to watch.

I’d have rated this film higher if it weren’t for the inaccuracies about Aisholpan being the first eagle huntress. As it turns out she’s also not the only eagle huntress around at present time and that the opposition to her vocation might’ve been exaggerated for dramatic purposes. Now, I wish the filmmaker had been truthful in presenting the story, as I don’t think the fact that there are other eagle huntress lessen the power of Aisholpan’s story. I still think she’s an extraordinary young girl whose story deserves to be told. If you’re curious to read it, this article talks about the real truth of female eagle huntress in Mongolian Kazakh society.

That said, I still highly recommend this film. Perhaps it’s more of a narrative than a documentary, but still it’s a wonderful, uplifting story that’s skillfully-told. A soaring film in every sense of the word. The visuals will no doubt wow you, but it’s the adorable & charismatic Aisholpan who’ll run away with your heart.

Have you seen The Eagle Huntress? Let me know what you think!