When I first heard of this film, I was immediately intrigued by the premise of an idyllic sun-drenched holiday that’s being disrupted by an unexpected visit. The people on holiday are famous rock star Marianne Lane (Tilda Swinton) and her lover, Paul (Matthias Schoenaerts). When we’re introduced to the couple, they’re stark naked by the pool on their villa. They read books, sun bathe, make love, basically enjoying a blissful time together in this picturesque remote island of Pantelleria, Italy.

Soon though, their moment of euphoric existence comes at an abrupt stop when Marianne’s old flame suddenly arrives on the island. They reluctantly pick them up at the airport to find Harry (Ralph Fiennes) and his young daughter Penelope (Dakota Johnson). What strikes me right away is how exuberant Fiennes was in this role, I don’t think I’ve ever seen him so vivacious on screen.

Things unfold in a rather unhurried fashion. I didn’t realize at first that Marianne is rendered practically mute as she had just undergone throat surgery, so even though there are glimpses of her in rock star mode (a la Bowie), we didn’t hear her voice until later in the film. She communicates with gestures, and Paul pretty much doing the talking for her. I’m glad I hadn’t read much about this film before seeing it, and so I won’t discuss much about the plot in my review. I do however, want to talk about the acting in this film, as it’s truly the highlight.

Fiennes and Swinton are absolutely marvelous here, displaying their acting versatility and proficiency. I’ve mentioned how exuberant Fiennes was. There’s an extended dance sequence where his character express himself through music that’s truly a joy to behold. In contrast, Swinton is much more reserved, communicating her emotions through subtle gestures and facial expressions. I have never seen such a romantic side of Swinton. She looks absolutely sensuous and glamorous here, and casting her as a rock star is absolutely spot on. I also adore every single outfit she wore here, they’re all perfectly-tailored for her. The fact that she’s unable to speak somehow creates an intriguing tension to the nervous energy that’s already present in the group. Every time these two are on screen, I was truly in awe.

I had seen Schoenaerts in a couple of things (Far From the Madding Crowd, Suite Française) and he’s certainly got a pleasant countenance about him. He displays a certain unpredictability here that the role of Paul requires. As for Johnson, I have to say she’s the weakest link here but I think it’s more to do with the fact that her character is the most underwritten. Up until the end I don’t really have much of a clue what she is all about and thus it’s hard to care for her character.

Working on a script by David Kajganich, Italian director Luca Guadagnino weaved a tale of jealousy, frustrated passion that escalates to a boiling point. What started out as a drama slowly unravels like a whirlwind and turns into something sinister. I’m glad there’s still that element of surprise and I really didn’t know where things will lead. Unpredictability is always something I appreciate in any story. There’s also a bit of humor thrown in throughout, especially that bit with the local police fangirl-ing over Marianne. 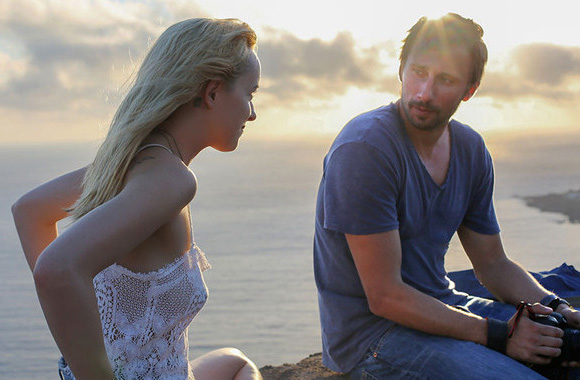 The island of Pantelleria is practically a character itself in this movie. The stunning cinematography by Yorick Le Saux (who also shot Clouds of Sils Maria) is definitely a plus here, but it’s the gripping story and fantastic performances that made this a memorable endeavor. Being that it’s a European production, there’s a frankness with sexuality and nudity, but yet the way it was shot it didn’t feel crude or distasteful. I wouldn’t say the film is perfect however, it felt a bit tedious at times and the filmmaker luxuriate too much on in the scenery. I’ve also mentioned the part about Dakota’s character not being as well-developed. I do think her casting might be more suitable than Margot Robbie who’s initially cast, as she would’ve been too mature-looking to play a late teen.

So overall, this is quite an absorbing psychological drama. I saw this film at a morning press screenings and there were less than five people in the entire theater. That’s too bad as I think this film deserve a larger audience. I highly recommend this if you’re looking for something off the beaten path that’s superbly acted.

Have you seen ‘A Bigger Splash’? I’d love to hear what you think!