Happy Monday folks! Boy, in terms of weather, this is gonna be a darn near perfect week for us here in the Twin Cities! Highs in the 50s and 60s every day and it’s only the beginning of March! Well, I ain’t complaining, in fact I’m wearing short sleeves already today.

Well, usually I do a weekend roundup but I figure I should just make it a Week in Review instead so I can include some reviews from the past week. Well, it seems that I saw the BEST new-to-me film of the year, as well as the absolute WORST one. But hey, I hit a TV milestone in that I finally finished Jessica Jones! I’m REALLY s-l-o-w when it comes to tv watching, obviously. I should have my review of season 1 later this month.

So here’s my reviews of the two I saw last week: 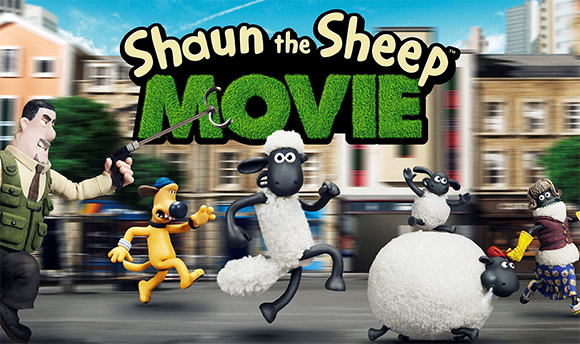 I’m a huge fan of Chicken Run, which was created by animators Nick Park & Peter Lord. I hadn’t seen the tv series version of Shaun the Sheep however, but when I saw the trailer for the movie version I knew I had to see it.

Just like Chicken Run‘s female protagonist Ginger, Shaun is a clever sheep who’s the leader of the pack. I LOVE the set up of the movie, how they just wanted a day off from the routine and have some fun… cooking, making juice, watch TV, etc. whilst they let their farmer master sleep in a caravan. Well, things didn’t go according to plan when somehow the van accidentally rolls away and leads the farmer to the Big City with amnesia. So it’s up to Shaun and the gang to rescue him and of course, as soon as they get to the city, hilarity ensues. The stop-motion animation alone is worth a watch, the shape of the sheep makes me laugh instantly and when they all dress up as humans I was on the floor laughing. The restaurant scene had me in stitches, I hadn’t laughed so hard in a long time. I’m glad I didn’t see this on the big screen with a room full of strangers. 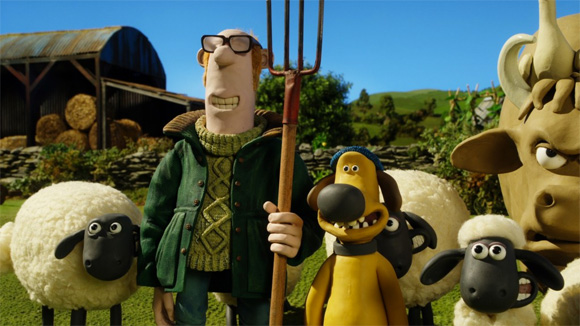 But what’s so delightful is the story has so much heart. The relationship between the sheep and the farmer and his dog Bitzer is well-developed that I actually teared up when they’re reunited. I love the plot involving the farmer at a hair salon, it’s just so clever and makes for some really amusing scenes. There’s a pretty funny villain in the form of a ruthless animal control worker and the prison-like shelter have some hilarious throwbacks to some classic films like Cape Fear, Silence of the Lambs, etc. It was unexpected but brilliant!

If you hadn’t seen this, I can’t recommend it enough. The animation style is a lot of fun to watch but it’s the heartwarming story and brilliant humor is one you’ll always remember. Glad that this was one of Oscar’s Best Animated Feature nominees, it’s certainly well-deserved.

Well, if Shaun the Sheep will likely end up in my best list of the year, London Has Fallen will undoubtedly be in my worst. It is the most idiotic movie ridden with action clichés and cringe-worthy moments. Seriously, it might as well be an episode out of BBC’s Spooks (MI-5) but without the clever writing and the gravitas of Peter Firth & the talented British cast.

There’s really no plot to speak of other than the reason POTUS Benjamin Asher (Aaron Eckhart) is in London is because he’s attending the British PM’s funeral who died suddenly. So the supposedly ‘most protected event’ on earth is going down with a bunch of world leaders gathering in one spot. It doesn’t take long before all hell break loose, as police and even the members of the royal guards suddenly open fire at people in the middle of the changing guard pageantry at Buckingham Palace. But of course his loyal secret service agent Mike Banning (Gerard Butler) is always there to save the president the only way he can.

It should tell you something when the only positive reaction I had after seeing the movie is this:

Seeing Colin Salmon in #LondonHasFallen reminds me how he’d make a terrific #JamesBond 10-15 yrs ago. He’d still make a great M now though.

In any case, if you get a kick out of seeing London engulfed in flames and Londoners shot to bits, this is a movie for you. The fact that it’s set in London doesn’t really have any bearing on the plot, it could’ve been set in other big European city like Paris or Berlin [oh boy let’s hope this doesn’t become a trend w/ this franchise w/ Paris Has Fallen and so on].

I have to say the SFX is slightly better than in its predecessor Olympus Has Fallen, which is odd as it actually has slightly smaller budget than the first one. It doesn’t matter though clearly there’s no spare left for the writers. I really can’t recommend this even to action fans as even though there are endless shootouts and car chases, none of it is really memorable as it’s been done better (and in a more meaningful way) in other action movies. It’s relentlessly violent and bloody, and the movie somehow made Banning appears even more bloodthirsty than even the Middle Eastern terrorists. 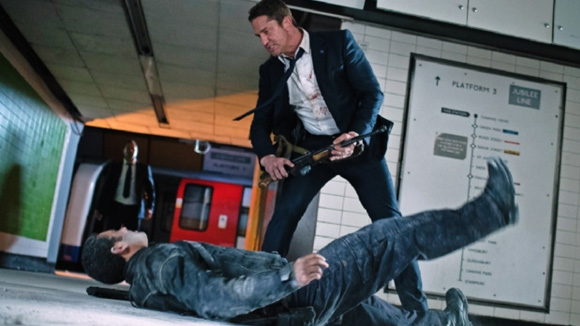 Some critics have said that this is the perfect movie for Trump’s America and y’know what, I couldn’t help thinking that as I was watching it. There’s a xenophobia vibe in the way Banning cruelly dismantles his enemies. I mean, what else are you supposed to make of lines like “Go back to Fuckheadistan, or wherever the hell you’re from!” At one point, president Asher remarked ‘Is that really necessary?’ after witnessing the brutal way Banning executed one of the terrorists, to which he casually replied, ‘no.’  Is sadistic behavior supposed to be funny? It’s really tough to even sympathize with a character like that. There’s not much we know about the protagonist to begin with, other than the fact that he’s about to be a dad but even the scene of him with his expectant wife has no emotional resonance whatsoever. That whole bit about him wanting to retire from his job and stuff is so corny and irritating because of course he won’t retire because Butler wants to keep this franchise going.

I wish I could say the movie has some redeeming qualities, but really there’s none. Even as good actors like Morgan Freeman and Angela Bassett showed up, I kept thinking how much they got paid to keep doing this kind of rubbish. There’s no memorable catchphrases or anything resembling wit or good humor. In fact, the better title for this movie should be ‘Gerard Butler Has Fallen: How Low Can You Go’ [face palm] Suffice to say this will end up in my Worst of the Year list.

So did you see anything good this weekend? If you’ve seen any of these movies, I’m curious to hear what YOU think.

33 thoughts on “Week in Review: Shaun the Sheep Movie & London Has Fallen”