Greetings all and sundry!

Having enjoyed a few recent get-togethers with family and friends before the murderous traffic of the Fourth of July weekend around the nation’s capitol. Topics of discussion have been many and varied. Given the age of the those included range around sixty, plus or minus five. Family wise, politics and religion are moot. Since we have been solidly ensconced from birth. And are of the same cloths. Though much louder and boisterous amongst friends.

Fashion and culture?… Really? Not many takers. Though the trends in films over the past ten years did take some Flak damage for its lack of original thought and dependence on comic books, CGI and the overall ease and enhanced elegance of falling into the “Sequel Trap”.

Music seemed to create the most varied and heart felt discussions. As name, lineages and styles were traced back to the early to late 1960s. To a time when four kids from Liverpool landed on US shores and changed music. If not “forever”, then for a few generations.

Creating some worthwhile grist for a good sized chunk of personal history. And the revelation of how… 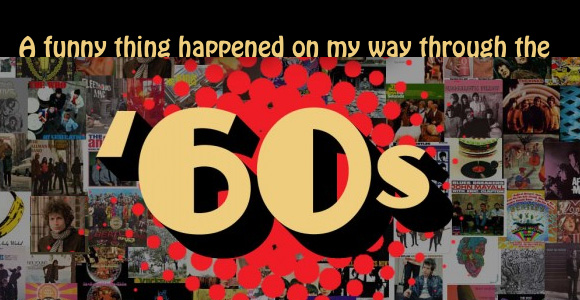 Being born in late June of 1954 has its advantages. A Child of The Cold War. Wonderfully appealing American excess in engineering and technology. Huge, chrome laden cars and “Entertainment Systems that ranged from portable transistor radios. To enormous polish woof encased, furniture sized AM and just starting out FM radios, TV and “Cocktail bars”. Time saving appliances sleeks and futuristic looking… So Much Tech! All props perfectly meshed for the first steps into “The Decade That Changed America!”

Which is exactly where my head was in mid August, 1963. When a local Washington, DC Disk Jockey, Carroll James, of WWDC 1260 unleashed the first volley of ‘The British Invasion’. With the very first 45 RPM cut of The Beatles’ ‘I Want To Hold Your Hand’ in the US.

…
Now. For a precocious eight year old whose head was filled with Saturday adventures of Rocky Jones, Space Ranger. George Pal big rocket ship and Space Station Science Fiction films. And who could, and still can do pretty decent freehand drawings of P-51 Mustang fighters and B-24 Liberator bombers. Courtesy of DC comic books.. I didn’t get it!

My sister, older by eighteen months did, As dis her female contemporary friends and cousins, Listening to them gasp and gush over George, John, Paul and Ringo was something strange. Yet oddly informative in later years. While I preferred an early and long standing contender from another British group, The Tornados. And their often covered, attempted, though never matched offering, ‘Telstar’.

…
With two guitars, drum and what may well have been either a Theremin. Or the very first steps into sound synthesis with a first generation of prototype of the Moog Synthesizer. Which left me wide open for the ballsier, grittier, raw and far less polished trappings of The Rolling Stones. Preparing the later, Second Wave with their cover of Bobby Troupe’s iconic, orchestral or Lounge Lizard, ‘Route 66’.

…
And young upstarts, Jeff Beck and future Guitar God, Eric Clapton‘s first baby steps with The Yardbirds. And their now very rare, but radiating future greatness to come with an early and unpolished shot across the bow. ‘I Ain’t Got You’.

…
The complete and noticeable lack of elegance, style and big budgeted studios reached out and grabbed another curious preteen male. Enhanced by the equally familiar “pop”s and “sizzle” that was part and parcel of vinyl. And lyrics which were roughly polar opposites of sweeter, cuter and lighter competition. Definitely aimed at guys.

Which created time explore domestic urban fare. Specifically, a young man from Duluth, Minnesota. Robert Zimmerman. A hard core acolyte of Woody Guthrie. Who was wise enough to change his last name to Dylan. Superb song writer and lyricist, Creating bodies of work infinitely adaptable to interpretation. And other imports from across the pond. To size up their takes on this youngster’s original works. Premiere amongst the imports. A five man group named Manfred Mann. Who got off the blocks early with ‘The Mighty Quinn’

…
For its fife introduction and lighthearted approach opposite Dylan’s near Calypso dirge. A trait that would return a few years later. With a left handed. freshly released from the 101st Airborne, African American acolyte of Dylan named Jimi Hendrix. And his guitar burning finale of The Trogs’ ‘Wild Thing’. His immortal, ‘Like A Rolling Stone’. And ‘All Along The Watch Tower’. That blew audiences in Germany and the UK away before reestablishing his Bona Fides and reputation in the US. At the 1967 Monterey Pop Festival.

…
Allowing for some “Less Is More” time with a quartet from Australia known as The Seekers. Lead by Judith Dunham. Who still has the best pipes in the business, And backed up by a guitars, banjo and a stand up bass. Their ‘World Of Our Own’ and ‘Another You’ are fine examples of clean harmonies and rhythms. Followed closely by Cyrkle and their ‘Red Rubber Ball’. And The Left Banke‘s ‘Walk Away Renee’ for its melancholy vocals and flute interludes. While, closer to home, Simon and Garfunkel were back from coffee houses. A venue they never should have left. Since their voices and harmonies were made for close, intimate surroundings. My taste was in March, 1969. At The Birchmere in North West Washington, DC. And “busking” (Street playing for loose change) the streets of London. Making themselves knows with albums ‘Wednesday Morning: 3 AM’ and ‘Parsley, Sage, Rosemary and Thyme’. With The Vogues’ Philly Street Corner Acapella influenced, ‘5 o’clock World’ close by to lighten the load.

To The Beach Boys for superb harmonies. With and without instruments. Having seemed to matured with their pre-MTV B&W video and promo for their ‘Sloop John B’.

…
A sterling example of “with and without’. Long before moving on to their marvelous, no frills Acapella multi album, ‘Pet Sounds’!

Keeping me well occupied until Woodstock rolled around. More out of happenstance and spontaneity than planning and scheduling. An event that will never happen again. Mostly due to those two factors than anything else. Though, for “A-List Talent”, former alums of Monterey and some new talent peeking out from under the stage. It’s very hard to beat!

Especially Janis Joplin, The Grateful Dead, Jimi Hendrix, The Who, Canned Heat (Still think their ‘Going Up The Country’ is an unexpected masterpiece!), The Band, Blood, Sweat and Tears for their superior brass. Crosby, Stills, Nash & Young and The Paul Butterfield Blues Band. And more than enough grist to keep me occupied from those who declined or couldn’t make the gig.

Specifically Frank Zappa and The Mothers of Invention. For Frank’s minor Guitar God mastery, off the wall lyrics, Hendrix like innovation at sound creation and strange tales. Chicago, The Byrds, The Jeff Beck Group, or Cream. Take your pick. Because… Eric Clapton. And The Moody Blues.

Almost too much variety to pursue and fill time. Until i happened across Capitol Records’ press of The Beatles‘ ‘Rubber Soul’. Listened to and purchased earlier. Allowed to “age”. As I am apt to do with mail, paperback and hard cover book purchases, sauces, marinades, vegetables or specific cuts of meat for an experimental or specifically planned therapeutic time in the kitchen and meal.

The group that my sister and myriad others had gone “Ga Ga” over years before than grown up and were showing off their lineage and what they’d learned in years previous. Specifically, their pre-Quarrymen, “Skiffle” (Guitar, Washboard, Washtub or Tea Chest Bass) inspired ”I’ve Just Seen A Face” and “I’m Looking Through You’.

…
Along with ‘Michelle’ and ‘Norwegian Wood’. Diverse cuts and puzzle pieces that mesh to create what music aficionados long for… An album with no bad cuts! Primed and ready to join the ranks of Janis Joplin’s ‘Cheap Thrills’. Any of the early Simon & Garfunkel albums. ‘Monterey Pop’. ‘Woostock’ Frank Zappa and the Mother’s ‘Overnight Sensation’ and ‘Apostrophe’. The Band’s ‘Rock of Ages’. The Grateful Dead’s ‘American Beauty’. Eva Cassidy’s ‘Live At Blues Alley’, Bob Dylan’s ‘Blood On The Tracks’, The Beach Boys ‘Pets Sounds’, And Pink Floyd’s ‘Dark Side Of The Moon’.

Author’s Note: A Hat Tip and Shout out to Cindy Bruchman and her exquisite post on Janis Joplin and ‘Cheap Thrills’. Which diverted my thoughts away from Classic Films and supplying the impetus for this belated piece of personal history.

Additional: Nearly all of the artists and their works mentioned can be found on You Tube.

Check out Kevin’s other posts and reviews

Wish to offer your own 60s music memories? The Floor Is Open For Discussion!

8 thoughts on “Throwback Thursday: A Funny Thing Happened On My Way Through The ’60s!”