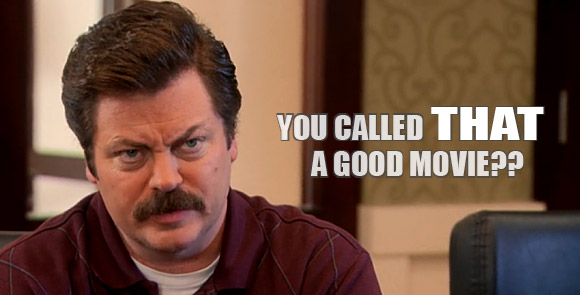 This list has been on my draft folder for some time. Well, now seems as good a time as any to counter all the the applause for movies as one award after another is getting announced. This post is inspired by Abbi’s list, as well as Kristin’s who posted her own list. Now, I don’t totally abhor all of these films, but like Abbi said, I really don’t get all the praise and for me at least, it did NOT live up to the hype.

I use IMDb rating and Rotten Tomatoes score just to show how critically-acclaimed these films are. Two of the classic films listed here are even considered iconic masterpieces which is even more baffling to me. If you happen to LOVE these movies, well I wish I could say the same but I think they’re awful, sorry! 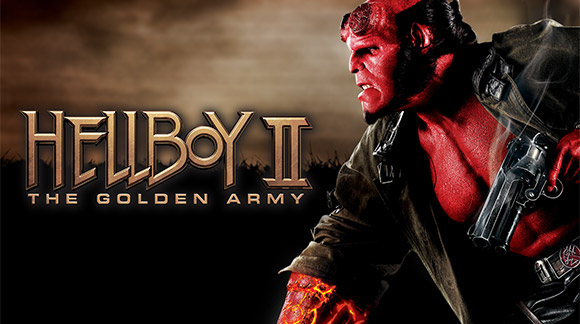 I actually enjoyed the first Hellboy and that’s the reason why I was excited to see the second one but heh, my hubby and I actually turned it off after less than a half hour. For some reason I just couldn’t figure out why we liked the first one but this sequel is so boring. All the peculiar creatures and fantastical setting we found amusing the first time around just feels derivative, it feels like a studio obligation instead of a passion project from Guillermo Del Toro perhaps because that’s really the case here. I like Ron Perlman in the role though, but I’d rather just watch the first movie again.

Pirates of the Caribbean: The Curse of the Black Pearl (2003) 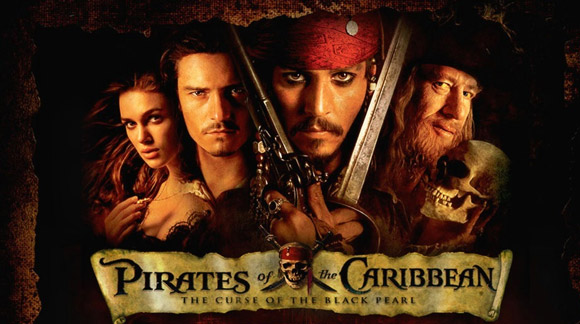 Just like Transformers, a string of horror series and young adult adaptations, I never get the appeal of Pirates of the Caribbean from the get go. Johnny Depp‘s flamboyant, Keith-Richard-inspired Jack Sparrow is amusing for maybe a half hour tops, but for some reason people just can’t get enough of it that the fifth movie is now in the works [face palm]. Alas Depp can’t seem to shake that role either now, it’s as if Sparrow became his acting *curse.* I haven’t bothered watching the sequels, though I had to endure the second one (or was it the third??) when I was at a friend’s house and it just reminded me how awful this franchise is. I wince every time Geoffrey Rush show up, but I suppose a big paycheck from this type of drivels allow him to do something worthy of his talents. As if these movies aren’t unbearable already, we also have to endure watching Orlando Bloom doing poor imitations of Errol Flynn! 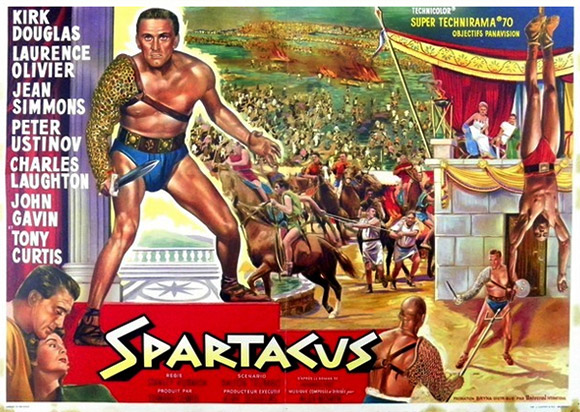 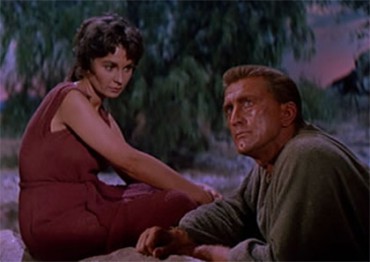 My jaw dropped when I found out just how high the score is after seeing the film. I saw this a few years ago and I could barely made it to the end. Now, I LOVE LOVE Ben-Hur which I have seen time and again over the years and it still held up, and as a fan of swords & sandal genre, I thought I’d enjoy this too. But heck, I find it corny, dull and boring. I don’t buy Kirk Douglas as a gladiator slave for a second. He just isn’t tough nor ruthless enough I’d imagine the character to be. Sure some might’ve called Charlton Heston a wooden actor, but he at least look the part as Ben-Hur and he made me root for his character. Not so with Douglas, and the romance with Jean Simmons have zero chemistry and the backdrop wallpaper they used for the scene is so awfully fake looking I couldn’t stop laughing!

So apparently Douglas did this movie to show William Wyler that he could do a Roman epic of his own, as he didn’t get the Judah Ben-Hur role he wanted. Per IMDb trivia, he was actually offered the role of Messala but he refused to play second banana. Heh, I thank the Lord he’s NOT part of Ben-Hur, I doubt he could do a better job than Stephen Boyd as Messala, let alone the lead role!! I also think Tony Curtis is completely miscast here as well.

Stanley Kubrick apparently disowned this project as he didn’t have complete creative control over it, well that explained it. Seems that this movie resulted from *too many cooks spoil the broth* syndrome. 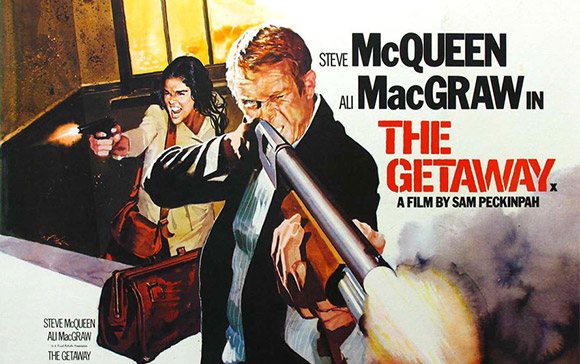 This was my intro to Sam Peckinpah as my pal Ted S. LOVES his work. Sorry Ted, but I really don’t like this film, like AT ALL. It’s also my intro into Steve McQueen who’s supposed to be this suave and cool hero, but meh, I find him to be blank and stiff. I saw some clips of him in Bullit and he’s pretty much acting the exact same way. Now, I like a tough, brooding hero as much as the next gal, but there doesn’t seem to be much going on internally in his character to make me care. Same with Ali MacGraw who’s gorgeous but doesn’t really have much going on otherwise, and the romance is as lifeless as a dead fish. 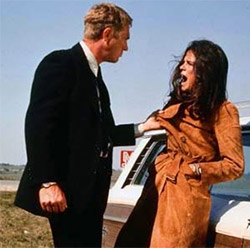 This film is labeled a thriller but I don’t find it suspenseful at all. Even the shootout from a supposedly celebrated violent action director is so lackluster and on a few occasion it made me laugh! The color of the blood here looks so obviously fake too which doesn’t help matters. Al Lettieri did look menacing as the villain but for the most part he’s more annoying than scary. Plus the whole creepy sex scene with Sally Struthers, forcing her own husband to watch her cheat with a criminal is just plain revolting. What bothers me most here is the violence against women by not just the villain but the hero, as there’s a scene where McQueen slaps MacGraw several times and I read that he actually did it spontaneously so her reaction looked real. Heh, there’s nothing cool or ‘macho’ about assault of any kind and it’s even more shocking that this film is rated PG!!

Interestingly enough, this is yet another movie disowned by the director himself, as apparently he butted heads with McQueen who wanted a different version of the story and the studio backed the actor. 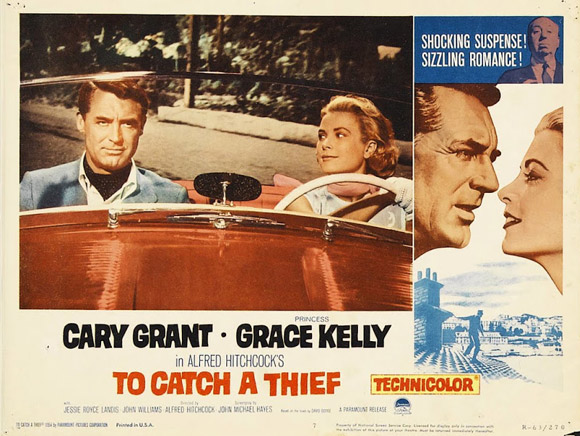 The poster promises ‘shocking suspense and sizzling romance’ but we’ve got neither. Apart from the gorgeous cinematography of the French Riviera – as well as Grace Kelly’s exquisite beauty – this film hasn’t got much to offer. Kelly’s soooo beautiful here that it’s actually distracting, and I was  also distracted by how tanned Cary Grant is in this movie, especially compared to his alabaster co-star. It feels more like a rom-com than a mystery romance, as it lacks any real suspense or even believable chemistry between the two leads. Perhaps the fact that Grant was 50 playing a guy in his mid 30s have something to do with that. It’s almost as tedious as Torn Curtain, another disappointing film from ‘the master of suspense’ director Alfred Hitchcock.

The premise sounds promising on paper and you’d think with this cast, this could’ve been far more entertaining. By the time the twist was revealed, I no longer cared who did what to whom. I suppose this film is worth seeing for the lush scenery and glamorous costumes (done by Edith Head, natch!), but as a film, it’s more window dressing than an intriguing piece.

Well, those are five movies that everyone seem to love but me. What do you think? Let’s hear it!
…