A Tribute to Charlie Chaplin
By Conor Holt

April 16th marked the 125th birthday of Charlie Chaplin, and this year is the 100th anniversary of the 1st appearance of Chaplin’s Little Tramp character (in Mable’s Strange Predicament or Kid Auto Races at Venice, depending on who you ask). Chaplin was one of the first true superstars of cinema. During the peak of the silent film era in the 1920s, the Little Tramp was one of the most widely recognized images in the world, with Chaplin’s films playing to a global audience, before sound created international barriers we still haven’t broken.

Chaplin was the first director I was actively aware of. As children, we don’t think of films being created, or think about who created them. Outside of the Disney Animated films, each film I saw was individual, independent, created out of thin air. In my early teenage 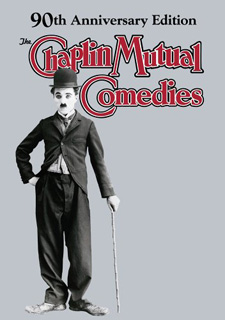 years, I saw the wonderful City Lights, and I was struck by how funny and touching it was – 70 years or so had not dated Chaplin’s perfectly choreographed slapstick (that boxing match is pure genius) or his sweet, romantic story. I wanted to see more of the Little Tramp.

That’s when I came across a box set of Chaplin’s Mutual Comedies at the library. Before Chaplin started making feature films, he made an incredible number of short films, first as an actor, and then as a writer/director/producer/composer AND actor. The Mutual Film Corporation hired Chaplin in 1916 – when he was only 26 years old – to direct two-reel short films, and paid him $670,00 a year. He was now one of the highest paid people in the world, with his own studio to film in – Chaplin had the chance to make exactly the films he wanted.

What the Mutual comedies represent is the evolution and development of both the character of the Little Tramp and the artistry of Chaplin. With each film, the storytelling becomes more refined, the jokes land harder, and Chaplin also first catches the whimsical, romantic heart that would bring depth to his later masterpieces.  Over the course of 18 months (before leaving for an even better filmmaking contract), Chaplin achieved the slapstick perfection of One AM and the rich, character driven humanism of The Immigrant. Later in live, Chaplin said, “Fulfilling my contract with Mutual was, I suppose, the happiest period of my life.”

And in the behind-the-scenes features of the box set, I learned about how Chaplin would experiment during filming, changing jokes if they weren’t working, switching out actors to get the right impact. The films were largely created on set, with no script, just Chaplin and his actors working out the story and the comedy until it worked. Not only was Chaplin evolving with each film, he was evolving within each film as well.

Chaplin carried this style into his feature films as well. Sometimes they would go over budget and over schedule, but knew he had to play with it until it was perfect. Chaplin famously struggled for months to figure out a way to make the blind flower girl think the Tramp is rich in City Lights. Finally it came to him: the blind girl hears a car door slam, and mistakenly thinks the Tramp got in a taxi. He sees this, and endeavors to maintain the illusion, helping her in any way he can, despite being even poorer than she is.

I think Chaplin’s style holds a lesson for all filmmakers, both young first-timers and experienced directors who still seek to grow. When facing a creative problem, Chaplin didn’t always find a solution right away, but he kept working at it until it was fixed. Chaplin didn’t burst onto the screen in a perfect first effort – he built his craft and talent over several years, improving with each effort. We may never make something as timeless as City Lights again, but at the very least we should strive towards doing our best work possible, no matter how long or how many retakes it requires.

Conor Holt is the writer, director, and producer of multiple short films. His most recent film, A Better Life, a science-fiction drama about marriage & control, which he directed & co-wrote, played at the 2013 Fargo Film Festival and the Twin Cities Film Fest, and recently won Best Editing & Visual Effects at the St. Cloud Film Festival. He is a graduate of the Minnesota State University Moorhead Film Studies program, and currently lives in Los Angeles, working odd jobs in the film industry and volunteering at film festivals.

As a tribute to Mr. Chaplin, what is YOUR favorite film from the legendary actor?