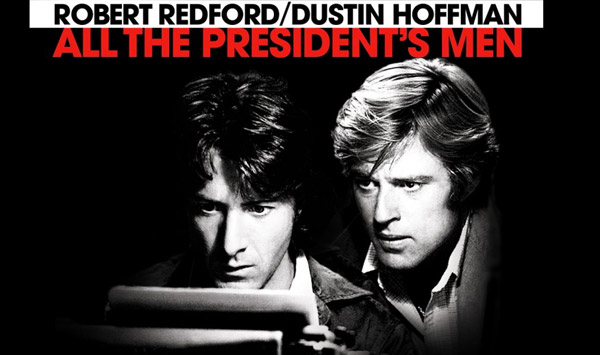 This month’s Blind Spot is a ‘hit two birds with one stone’ type of a thing in that it’s part of the conspiracy movies I’ve been bingeing on in anticipation of Captain America: The Winter Soldier. It’s something I’ve been wanting to see for ages, glad I finally got around to it.

I wasn’t even born yet when the scandal happened in 1972, starting with a break-in at the Democratic National Committee (DNC) headquarters at the Watergate office complex in D.C. I’ve seen Bob Woodward and Carl Bernstein on TV over the years and I think I may have known they’re the journalists who first uncovered the scandal that led to President Nixon’s resignation, but I never realized just how they got there.

It’s a testament to Alan J. Pakula‘s shrewd direction and Robert Redford & Dustin Hoffman‘s excellent performances that this film remains as gripping as ever, even watched for the first time 38 years after its release. It’s the quintessential political conspiracy drama that earns its ‘true classic’ label, it currently sits at #77 on AFI’s 100 Greatest Films list. I actually watched this film just a day after Pakula’s other conspiracy movie made just two years earlier, The Parallax View, but I enjoyed this one a whole lot more. Obviously I already know that Woodward and Bernstein survived the whole ordeal, but that fact in no way lessens the suspense of the film. It’s perhaps the best film about investigative journalism, and no doubt it’s the film shown in every journalism class in America. Believe it or not, I actually wanted to be a journalist when I first came to the States, so I might’ve seen some clips of this in my Broadcast Journalism class in college.

I was completely engrossed in the story, but not only in terms of the scandal itself, but in the realistic depiction of how the journalists work on their story, as a lot of the film take place within The Washington Post. There’s a scene where the veteran Bernstein started making revisions of Woodward’s drafts without first consulting him. “I don’t mind that you did it,” Woodward said, “I just mind how you did it.” Clearly they didn’t get off on the right foot, but they soon bonded over their tenacity to get to the bottom of this story. There’s a nice rapport between the two actors that worked well here. Clearly the two reporters are such workaholics and became so consumed with the story. I’d think that real journalists have a bit of that obsessive streak in them when they’re following the trail of a story, especially something as important as this one. Little did they know where the story would lead, as the trail just kept getting higher up the chain of the Republican Party and eventually all the way to the White House!

All the dialog between Woodward & Bernstein and the editors, played by Jack Warden and Jason Robards are quite fascinating, as it shows how risky it was to break a story like this. Amongst the supporting cast, Robards was particularly memorable as Benjamin Bradlee, the then executive editor at the Post. He’s very convincing as a seasoned journalist and has the gravitas required for the role. The scenes in a parking garage where Woodward held his secret meet-up with Deep Throat (a pseudonym the journalists give to the secret informant) is rife with tension, handled brilliantly in an eerie, atmospheric way. Hal Holbrook is perfectly effective in his brief appearance, adding so much to his character and making it practically iconic. “Follow the money,” he says, in one of the most memorable quotes in William Goldman‘s Oscar-winning screenplay.

…
The scenes where Bernstein coerced his sources to talk are particularly intriguing, especially the one with the book keeper of Committee to Re-elect the President (with an appropriate acronym of CREEP). Jane Alexander was nominated for Best Actress in a Supporting Role and I agree that’s quite a fantastic performance. She only had about 8-minute screen time in the entire film, about the same number of minutes Dame Judi Dench appeared in her Oscar-nominated turn in Shakespeare in Love. Truly, there’s really not a boring moment here even during the most seemingly mundane stuff like typing or people talking on the phone. There’s a six-minute continuous tracking shot of Redford being on the phone, according to IMDb trivia, DP Gordon Willis did that in one take!

I’m surprised Willis was not nominated for an Oscar for his work here, though later on he received an Honorary Academy Award in 2010. I love how he used a variety of creative shots, such as the one where the two reporters were doing meticulous research at the Library of Congress. The camera shot them from above, starting with a close up of their hands sifting through a mountain of library slips and it slowly pulls away, accompanied by the sound of rustling paper and very subtle background music. No words are spoken but it’s a powerful scene. I found this wonderful Mise-en-scène article on this exact scene where the author astutely observed that … “The scene symbolically represents the story of the film, that of two men against an entire administration. It expresses the immensity of the task that lay ahead for the reporters, not just in searching through library cards, but in revealing the truth behind the misdeeds of the administration.”

…
I love the attention to details of this film, the clothes, the sets, and all the details within The Post headquarter. Apparently the design department of the film even made a replica of the out of date phone books to make it even more authentic! I’m sure there are countless details that I failed to catch. This is definitely the kind of film that warrants subsequent viewings in order to get the details I’ve missed on initial viewing.

I’ll end this review with one last observation. I like how the story stays focused on the journalism aspect of the scandal and how the Post finally got to publish it, there’s no unnecessary subplots about the personal lives of the leads or anything of the sort. What an intriguing slice of American history, and as someone who’s not born in the US, it’s especially fascinating to see. To this day, every political scandal is tagged with the “-gate” suffix because of this, which adds to the timeless aspect of this film. Thanks to Redford for acquiring the rights to Bernstein’s and Woodward’s memoir and for Mr. Pakula for bringing this engrossing political history to life.

This is the first entry to my 2014 Blind Spot Series, as first started by Ryan McNeil at The Matinee, and continued by Dan Heaton at Public Transportation Snob .

What do you think of All The President’s Men? I’d love to hear what you think!