Happy Friday everyone! Today we’ve got another double review of a film which release has been delayed for a couple of months. Originally, this was to be released last December during awards/holiday season, but director/star George Clooney actually asked the studio for more time for post-production due to the special effects weren’t ready. Sarah and I went to the screening last Wednesday, here’s our take on it:

When I was visiting Germany last year and killing time waiting for my train back to Dusseldorf from Cologne, I was struck by a postcard in one of the gift shops with a Google earth type of photo of Cologne in post-World War II Europe. The entire town was decimated by repeated bombings but somehow the 13th century Cologne cathedral still stood tall amidst all the destruction- as if saved only by the grace of God. “The Monuments Men,” the new movie co-written and directed by George Clooney, tells the story of curators, archivists and art historians from thirteen countries whose mission it was to save some of the most culturally significant works of art from Nazi destruction near the end of World War II. In a Napoleonic-like move, Adolf Hitler often ordered his armies to claim some of Europe’s greatest art treasures for his planned “Fuhrer Museum” to be built near his boyhood home in Austria. (Did you know Hitler was a failed art student? Neither did I. When George Stout, an American art conservationist played by George Clooney in the movie, shows one of his paintings to the newly assembled group, one of them remarks, “Hitler did that? It’s not bad.” However, James Granger, played by Matt Damon and based on Metropolitan Museum of Art Director James Rorimer, says, “Well, it’s not good.”) When the fall of the Third Reich became a reality, Hitler commanded his men to destroy everything and the group that has become known as the Monuments Men swung into action, embarking on “the greatest treasure hunt in history.”

As a self-proclaimed history buff who has studied and visited many of the places in the film, I really wanted to like this movie but it felt like this great story got lost in a mishmash of a film trying to be a combination of Hogan’s Heroes, Saving Private Ryan and The Da Vinci Code. Call it a movie with an identity crisis- it was like it couldn’t decide if it wanted to be a comedy or a drama. SPOILER ALERT! (Without giving too much away, one example is a scene where one of the Monuments Men gets shot and it’s obvious he’s going to die. However, in the next scene he is cracking jokes. Umm, hello? It’s wartime and you’re dying.) The cast, which also includes Bill Murray and John Goodman, do what they can but ultimately can’t save this one. About the only person who seems to understand the gravity of the situation is Claire Simone, the museum curator turned spy played by Cate Blanchett. When showing Matt Damon’s character some of the Nazi’s re-possessed goods, he asks incredulously, “What is all this?” “People’s lives,” she solemnly replies. Her scenes were a breath of fresh air. 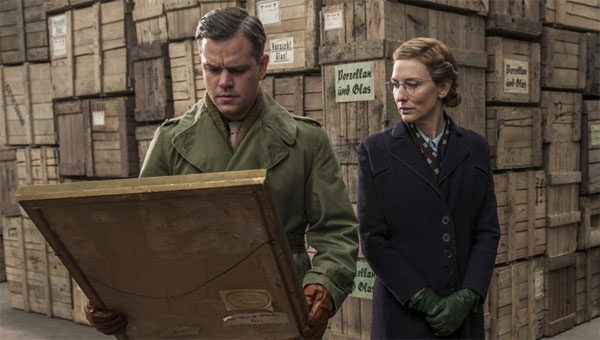 This movie does do a couple of things well. It helps put you in the moment where these men unearth thousands of stolen, priceless artifacts. What must it have been like to gaze upon these famous artworks and know that you had a major role in securing them for future generations to enjoy? And it also provides a powerful reminder of what we were fighting for- not just art, but our culture, history and way of life. Two scenes brought this home to me: the first near the beginning of the film where you see the beautiful landscape of Paris decorated with Nazi swastikas and the second toward the end of the film where you see Nazi soldiers indiscriminately torching some of what they had stolen. Maybe it was these ideals that frustrated me the most about this movie- it was okay, but it could have been so much better.
…
The movie is based on a 2010 book of the same name by Robert Edsel and it did make me want to learn more about this fascinating point in history. Also, in a local connection, the Minneapolis Institute of Arts has put together a self-guided tour identifying items from its own collection saved by the Monuments Men or with other World War II related stories. As our temperature doesn’t want to rise above zero lately and the Minneapolis Institute of Arts is free, this seems like a great idea! As for the movie, it piques your interest but doesn’t quite hold you in its grasp.

When I first heard about this film, the subject matter intrigued me more than even the ensemble cast. Truthfully, seeing Matt Damon and George Clooney with their megastar smiles in the trailer, it felt like an Ocean’s Eleven heist type of flick, but with Nazis. Hmmm, it turns out that first impression wasn’t that off-base after all.

Seems that the film has everything going for it to be a truly great WWII drama. Clooney is after all a reputable Oscar-nominated director/writer/actor, a triple threat on top of being one of the biggest movie stars in the universe. He’s got the clout to assemble a bunch of Oscar-caliber International cast and crew, who are more than up for the task to bring this amazing wartime tale to life. But yet, even halfway through the film, it just left me wanting. For something so monumental in history, the film just doesn’t do the story justice.

To call this film uneven would be putting it mildly. There’s a tonal hodgepodge that makes it quite hard to really grasp the weight of the mission of the men (and women) involved. Art historian Frank Stokes, played by Clooney himself, preaches to the audience the significance of this art-rescue mission and how noble the cause was for humanity that it was worth a person’s life. Yet the way the film’s played-out lacks the gravitas of that sentiment. At times it’s just too lighthearted for its own good that it loses its impact. I’m not saying that mixing drama with comedy can’t work, I mean there are great films that finely tread the line between drama and comedy, but I’m not sure it works well here.

There’s a scenario where one character accidentally stepped on a land mine, but it’s treated like a humorous scene. I guess there ought to be an SNL skit where the Monuments Men don’t know which foot to stand on. Seems that Clooney himself realizes the challenge of getting the tone right, as this article from The Wrap points out  “If we get the tone right it will be a really fun film …” he said. Well, the film is not without its shares of fun, but I think if the tone were right, it would’ve been a great film.

Performance-wise, seems that the cast are having a good time making this which is fun to watch. Clooney and Damon are pretty good but I’ve seen much better work from both of them. It’s amusing to see Bill Murray being Bill Murray, Bob Balaban with his deadpan humor and Jean Dujardin being his irresistible charming French guy that he is. Now, as much as I got a kick watching them, I barely knew about any of them nor any of the other characters in the film. Why did they sacrifice their lives for this mission? Is it simply their love for art, or was there something more? As a result, I couldn’t connect with any of them no matter how hard I tried. Even during the most dire circumstances, it didn’t incite lump-in-my-throat kind of emotion, and this coming from someone who cry easily at movies. I think Cate Blanchett‘s character, the only female cast who’s the most solemn of the whole bunch, is the only one who lends credibility to the story. But still her character’s not explored as well as I would like, either.

This is Clooney’s fifth directorial effort and he also co-wrote it with his screenwriting partner Grant Heslov.  Seems that the filmmakers’ heart are in the right place and the film is not without its poignant moments. I just wish those moments are more consistent instead of just in few and far between. I don’t think that even if this were released just in time for Oscar season that it would’ve been in the running. It’s not a terrible film however, I’d recommend it as a rental if you love the cast. But if you want to really know who the Monuments Men are and their mission, I’d think there are documentaries on them that’s more satisfying and compelling. As it stands, it’s quite entertaining with a tinge of poignancy, though it lacks a certain level of artistry that’d give us a lasting impression.

What do you think folks, agree/disagree with our review? Well let’s hear it!