…
I’m excited for The Big Noise and One Chance (aka the Paul Potts movie), which couldn’t be more different in terms of story and tone. But hey, the eclectic schedule works for me!

I’ve posted the premise and trailer of One Chance in this lineup post. Now here’s the premise of The Big Noise which plays at 4pm today:

Morris Falzon works with his father George in a small law firm in Sydney’s Inner West. With his personal life a mess and the business falling apart, Morris is thrown a lifeline when a dying client reveals he is leaving Morris a small fortune in his will. It seems his luck is about to change. However, when his client stages a miraculous recovery, it seems it’s back to the grindstone… or is it? Morris and George hatch a plan that will either make or break them – literally.

…
Director Dominic Pelosi kindly granted me an interview about his film. Check it out below:

1. I just saw the film Nebraska by Alexander Payne at TCFF that’s also filmed in black and white. So I’m curious what made you decide to shoot your film in b&w?

Black and white for me gives a separation from reality that I find to be a more traditional approach to cinema and seems to be somewhat under-utilised these days. Whilst aesthetically black and white appeals to me greatly it is also highly dependent on the script – the muted image can often aid in the tone of a film, given that The Big Noise has dark undertones it seemed a logical choice for the story telling. In addition having a very limited budget, scenes were often shot months apart allowing the black and white hopefully, to smooth any inconsistencies in the footage.

2. I read that your cast are largely unknown. How did the casting come about for your film?

Casting nonprofessionals was a choice made very early on, which made the casting process much easier in a sense. If the script called for a lawyer, then we would approach a lawyer, or if it required a real estate agent then we would try convince a real estate agent to do the part. This was a process that heavily borrowed from the Italian neo-realist filmmakers which to me can provide an organic performance; the actor doesn’t have the tools to rely on, the tools that modern viewers have become accustomed to seeing. This can obviously have varying results, but the overall tone is something that I think is unique to this process. We did however cast a couple of professional actors in minor roles to try and better balance some of the more dialogue intensive scenes.

3. Would you speak a little (or a lot) about the Italian-Australian community depicted in your film? Does this film stem from a personal experience? I’m also curious what was the significance of the title.

Many Italians migrated to Australia in the 50’s and much like anywhere else set up pocket communities that maintained much of their heritage. My brother Andrew (screenwriter) and I have grown up around that type of community as our father arrived in Australia from Italy in the mid- 50’s. The Big Noise borrows heavily from those experiences. That element of the Italo-Australian community has somewhat faded in recent years and in a way The Big Noise depicts the struggle for that 1st generation to adapt to that change. The sense of uniformity in Australia has been slowly blanketing these pockets and there was certainly an attempt to present this in the film. To comment or have an opinion on this point wasn’t my intention, rather to show the consequences of big societal changes on the individual – this particular story was something both Andrew and I know well so the Italian-Australian angle became a good vehicle for us.


4. The writer of your film, Andrew Pelosi, I presume he’s related to you? Did you both come up with this film concept and how was your experience working with Andrew?

We both share very similar interests and love, for the most part, the same movies. One of our favourite films is Truffaut’s Shoot the Piano Player, so we spoke about someday possibly making something in that type of framework and tone. Andrew gave me a script that he has been able to evolve over time to suit our actors and budget restraints that I felt had a similar spirit to Truffaut’s film. He was able to conceptualise ideas that we had expressed to each other into a much more digestible screenplay with regards to plot etc. We would then work together in fleshing things out throughout the filming process. We are extremely close anyway so making a film together was fairly seamless, there were times like any relationship where I’m sure he’d had enough me. We will no doubt continue to make films together.

5. Since this is your debut and your film was made on a small budget, what was the biggest hurdle/challenge, as well as rewarding moments, that you faced when you made this film?

Not having a great budget meant undertaking many of the necessary technical aspects of filmmaking whilst trying to direct. This probably proved the most difficult aspect for me personally. Learning the camera and pulling my own focus whilst trying to get a performance from a nonprofessional actor definitely had its moments. But was also the most rewarding aspect. I’m not sure if we could have made the film any other way. For many of the actors this being their first time performing in any capacity meant that having a crew of two or three people (at most) allowed for a level of comfort that wouldn’t be found on many film sets.

The film is also around 50% in Italian which made it extremely difficult for me as I don’t speak a word. Our father translated those scenes for us as Andrew is very limited in the language as well. There are two key actors that don’t speak a word of English so trying to direct them was challenging, I would attempt to direct them by physically showing them what to do. Editing the film was a real process, trying to correct technical errors and cut a film that was true to the script took a very long time, but it was thoroughly enjoyable. Working with nonprofessional actors and having them be involved with something that they wouldn’t have ever thought of being involved in perhaps provided the greatest satisfaction. It is certainly something I hope to continue on future films.

THANK YOU Dominic for the insightful interview!! Hope you’ll check out The Big Noise when it plays near you!

Now, another film I’m super stoked about is August, Osage County. Since I’m flying to NYC on Saturday morning, I couldn’t see the original screening at 6pm. Fortunately TCFF just added a second screening tonight, wahoo!! Check out the latest poster w/ Julia Roberts attacking Meryl Streep, that about sums up the dysfunctional family plot, doesn’t it? Plus the cast is just killer! Check out the trailer on this post. 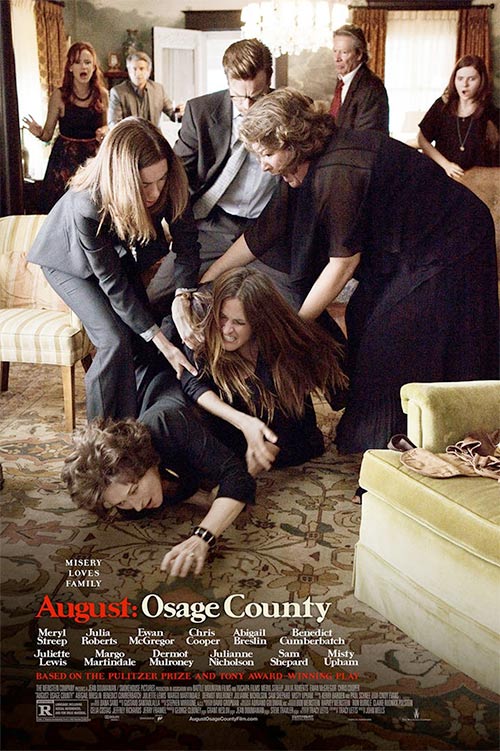 Stay tuned for more TCFF coverage. So any of the films above that caught your eye?