Well I believe I know why Paramount decided to delay the release of this film from last June to March of this year. Their excuse was that they wanted to add 3D effects to the film but rumors were all over the internet that they also wanted to beef up Channing Tatum’s role. Those excuses were credible but I think the real reason why they delayed it from a Summer release to Spring is because the film is pretty bad. I’m assuming some executives high up in the food chain saw it and realized they have a turkey on their hands and didn’t want to spend more money promoting it in the busy and competitive Summer movie season.

The film picks up right where the first one ended, if you remember Zartan (Arnold Vosloo) who masqueraded as the US President, is still in charge of the White House, while the real President (Jonathan Pryce) is being kept captive at a secret place. Duke (Channing Tatum) is now the captain of the elite squad G.I. Joe. His second in command is Roadblock (Dwayne Johnson), a new addition to the franchise. As the film begins, the Joe team is being tasked by the President to retrieve a nuclear bomb from a terrorist group somewhere in Afghanistan. They succeeded but later the entire Joe team got ambush and only a few of them survived. I’m not gonna go into more details about the plot and to be honest, who really cares right? You go into this kind of film for the action, not the plot. Also, returning to the franchise are fans favorite Snake Eyes (Ray Park) and his nemesis Storm Shadow (Byung-hun Lee). There’s a subplot that involves Storm Shadow and Zartan that didn’t make a lick of sense, but again who cares.

Not returning to the franchise is director Stephen Sommers, stepping in behind the cameras this time is Jon Chu, whose previous films were Step Up 2 and 3 and he also directed a bunch of music videos. Upon landing the directing gig for this film, Chu said he wanted to make sequel more realistic and grounded. Well I guess he achieved that, but unfortunately it didn’t work for the film. I thought by making the movie more *realistic,* it took away all the fun and it bored me to death. Seriously, for an action picture, the film just dragged on and on and on. The action scenes weren’t exciting or original. In the first film, the action scenes were over-the-top but at least those sequences were fun to watch. Chu also doesn’t know how to build up tension, it seemed the action just happens for no reason than to include the action, maybe he thought people would get bored if he doesn’t pepper the film with fight/shoot-out scenes.

Then there’s the 3D, wow seriously this was probably the worst 3D conversion I’ve seen so far and trust me I’ve seen a lot of bad ones. If you really want to see this movie, I highly recommend you see it in 2D. The film has a ton of action and fast movements so it’ll give you a headache if you see it in 3D. I think the only sequence that worked in 3D was the scene where Snake Eyes and his side kick battles a bunch of ninjas on the mountains. Other than that scene, there’s no reason for this film to be shown in that format. 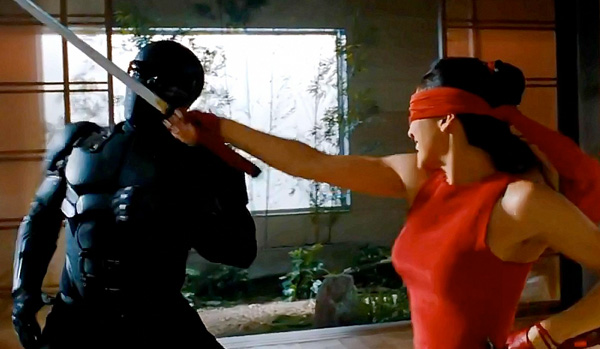 You’re probably wondering why I haven’t mention Bruce Willis yet. Well to be honest, I don’t why he even agreed to star in the film. He didn’t have much to do nor appear on screen that long. I guess Mr. McClane will accept any role they offer him these days [shrug]

It’s only March but I’m quite sure G.I. Joe: Retaliation will make it to my top WORST film of the year. My recommendation is to save your money and maybe rent it if you’re feeling bored on some weekend. Or better yet, wait ’til it airs on TV so you don’t even have to pay for it.
…
– Review by Ted S.
…

Well, did you see the movie? What did you think?