What will you be watching today, folks? Are you going to the cinema to see the latest of the Disney animated feature Wreck-It Ralph (check out my pal Terrence’s review), the Kung-fu movie The Man with the Iron Fists or Denzel Washington’s Flight? Well, if you decide to rent something, here are a couple you might want to check out if you haven’t already: 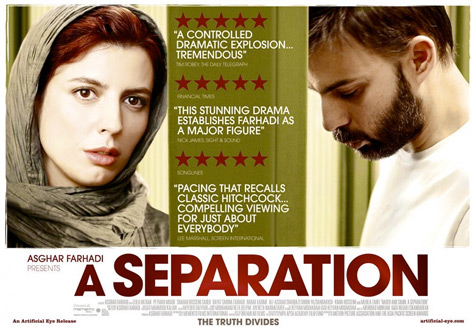 The first Iranian film which wins an Oscar. Yes that sentence is enough to catch my attention to see A Separation at the cinema. The film tells the story of a married couple Nader (Peyman Moadi) and Simin (Leila Hatami) which have to live separately because of their differing decisions either to move out of the country for the sake of their child or to stay in Iran to take care of their dad suffering from Alzheimer’s disease. Parent vs. child. It’s never an easy choice.
…
It all started with various daily things which need to be done after Simin move out from the house to live separately. Then Nader hires a caregiver to take care his father. The film shows in a matter-of-fact way what a separation could possibly bring to a family. The writer/director Asghar Farhadi managed to build more and more conflicts from the beginning until the very end of the movie. 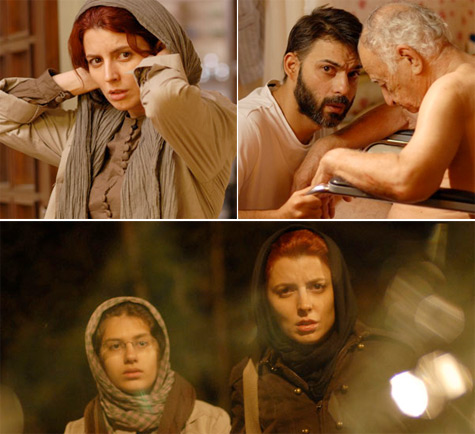 …
The film was playing on my emotions a lot. Curious, sad, angry, sympathy. As the audience, I don’t even know on which sides they are actually on. The way this movie reveal the facts practically reminds me of Nothing But the Truth. I can’t stop questioning which fact of the movie is true. It’s a drama that turns out to be a thriller, too. Not only did the film make me think, A Separation has a great cast which really support the dramatic parts. Every main character plays a strong role to tell the whole story. One of my favorite scenes would be when Nader teaches her daughter some lessons for her school. I could see a very strong bond of how a father wants her daughter to be smart and mature.
…
In the end, A Separation delivers their targeted message very well. A beautiful conclusion which will let the audiences have their own thoughts about a marital separation. 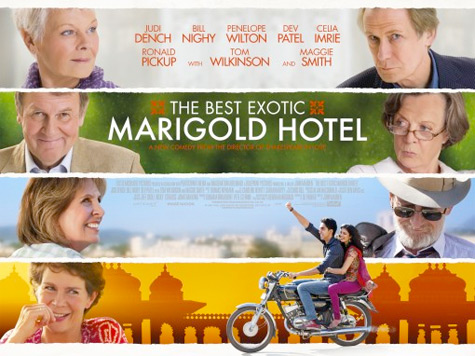 As I’ve alluded to in my review of Quartet, I LOVE films about older people’s adventure. Perhaps because I grew up with my grandmother for years, I’m not sure. Now the main draw for me to see this British dramedy is the stellar cast! It also marks Judi Dench’s third collaboration with director John Madden — the first two earned her an Oscar nomination and win for Mrs. Brown and Shakespeare In Love, respectively.

The title refers to a hotel in Jaipur, India which is advertised as a newly-restored “for the elderly and beautiful.” Well, after a lengthy and exhausting journey, all seven of the British retirees want to do is relax in their luxurious lodging, only to find the place to be well, less sumptuous than what they had in mind. The hotel turns out to be a run-down place run by a young man who dreams of restoring his family business to its pristine condition.

Each of the characters deal with this unpleasant surprise in multiple different ways, just as each of them have their own reasons to come to the country in the first place. Some of the multiple storylines work better than others. I don’t know if I’d call the direction uneven but certainly there are parts of the movie I just don’t care for.

For me, my favorite parts involve the two Dames, Judi Dench (Evelyn) and Maggie Smith (Muriel), and also Tom Wilkinson’s character who attempts to fulfill his lifelong wish to reunite with someone from his past he cares deeply about. I think Muriel has the biggest personal growth of them all, as she overcomes her own prejudice out of her encounter with a hotel’s employee who can’t even speak English. Evelyn who’s a widow not only become accustomed with the culture, she also finds a job and perhaps a second chance at love. The elderly Brits’ stories are inter-weaved with the hotel manager Sunny (Slumdog Millionaire‘s Dev Patel) whose buoyant spirit lives up to his name. He deeply clashes with his mother’s career aspiration for him, as well as the cultural expectation of arranged marriage as he’s in love with a girl who works at Evelyn’s call center.

There’s plenty of humor for sure, but the story also has some poignant moments that are pretty affecting. There are themes of cultural taboo and also outright racism that make you wince at times, but overall the spirit of the film is pretty light and colorful, just like the vibrant India setting. It’s not a flawless movie however, the pace at the beginning could be much improved, and the relationship between Dench and Bill Nighy just wasn’t handled as well as I expected. There are also some cringe-worthy moments of Ronald Pickup’s character that I don’t find it particularly amusing. But despite all that, this is quite a lovely movie and I’m definitely not disappointed by my favorite cast here, especially Dame Judi. I always enjoy watching her act and she looks particularly radiant here.

‘Everything will be alright in the end’ that’s the motto Sunny tells his guests when they’re disappointed. It’s an uplifting motto we could all take to heart.

Have you seen either one of these films? Well, what did you think?