Well, I’ve said last week that October would be the best movie-watching month of the year and it certainly is! The most awesome thing about covering a film festival is that you get to watch films that you otherwise might not even know about. I wish I had more time to see more films but I think more than a dozen films in a week whilst juggling my full-time job might be too overwhelming for me. Plus the movies would start to become a blur and blend in together, ahah.

Before I get to my top five, here are my mini reviews of the Saturday showings:

How well do you really know your friends? And can a friendship change your life? This feature film debut from writer/director Ted Koland will makes you think about those things after you see Lumpy. The title refers to a nickname of an obnoxious, party-animal best man who unexpectedly dies on the wedding night, forcing the bride and groom to cancel their honeymoon and fly to the snowy Minnesota to arrange his funeral.

The first part of the film starts out with the newlyweds (Justin Long & Jess Wexler) coping with this tragic and very unusual circumstances. Their relatively comfortable lives are contrasted with that of a 15-year-old girl living in a small, northern MN town who lives with her junkie mother. The film alternates between the present and the past, using flashbacks of the unexpected connection between Lumpy (Tyler Labine) and Ramsey (Addison Timlin). Ramsey lives a tough and forlorn life, not only does her mother neglects her, her mom’s boyfriend also makes her steal drugs to make meth. All this makes her unlikely friendship with Lumpy all the more moving.

I must say that I’m most impressed with Addison Timlin in this film, she is definitely a promising young actor and based on the LUMPY panel on Saturday, her career is just taking off with multiple TV and movie offers. I also love Frances O’Connor who plays Ramsey’s mother (I love her in Mansfield Park), it’s quite an unusual role that I don’t normally associate her with. Though Long is the most popular actor here, I don’t see him as the star of the film, though this film shows that he’s capable of tackling a dramatic role.

I’m glad that Koland chose to shoot the film in his native state here in MN, it’s fun to see the locations that I recognize throughout the film. I love the uplifting message about the power of kindness and the transformative power of friendship.
… 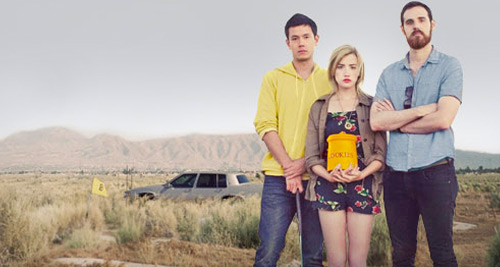 If Lumpy illuminates the power of friendship, then Dead Dad would make you evaluate the strength of family. This is the quintessential indie that focuses on a very human story in which the performances are the ‘special effects’ of the movie.

As the title should tell you, the film opens with a young man discovering his alcoholic dad lifeless body in his home. His death brings three estranged siblings to the funeral. Russell is the oldest who’s been taking care of their dad, Alex is the adopted Chinese son and Jane is the youngest. Right away you realize that the three siblings haven’t seen each other for a while and they haven’t been in good terms either.

The main plot of the film involves finding an appropriate place for the siblings to spread their dad’s ashes, inevitably bringing the three together in the process, even if the journey isn’t always smooth or pleasant. It’s important to note that the three main actors playing the Sawtelle siblings are relatively inexperienced, yet they have a believable chemistry. The relationship between the three of them sometimes remind me of my own family, as I’m also the youngest of three and my two brothers and I don’t always get along. It’s interesting to see how their dad weren’t always there for his children, but he ends up bringing them together in his death.

Kudos to director Ken J. Adachi for creating a real portrayal of family, it doesn’t feel forced or emotionally manipulative but the story definitely pull your heartstrings. The production values are pretty good as well for a tiny-budgeted film, filled with innovative shots and close-ups. I’d be curious to see what Adachi would do with a bigger budget, he’s certainly a talent to watch.

This one is another compelling look at the friendship in our lives, this time it involves two estranged friends from college. Erin (Ryan Driscoll) is unemployed and is living with her long-time boyfriend. All of a sudden, Kaylie (Elise Ivy), her former college BFF shows up at her door, wanting to rekindle their friendship. Soon we finds out that Kaylie’s marriage is over and she travels from Grand Rapids Iowa all the way to L.A. Reluctantly Erin lets her stay in the house she shares with Ian (Armand DesHarnais).

At first I was a bit apprehensive that this is going to be one of those home-wrecker story, I was dreading the inevitable seduction that happens between Kaylie and Ian. Fortunately there’s none of that here, in fact, the complications that arise between Erin and Kaylie reveals that nothing is what it seems, and my preconceptions of the two women gradually shifts as the film progresses.

Glad to see not one but two strong female roles here, thanks to Scott Tanner Jones, another talented writer/director who was present at the TCFF screening. Both Driscoll and Ivy did a wonderful job conveying the emotional complexities of their characters. The scene towards the end where they open up their deepest secret to one another is quite heart-wrenching and I did not see that revelation coming. The message of forgiveness and acceptance amongst friends is already very inspiring, but the filmmaker also has an encouraging message of a woman standing up to herself and striving for her independence. At the same time, I appreciate the fact that the men in the story aren’t depicted as monsters either, it’s great to see when a filmmaker doesn’t resort to portraying one-dimensional caricatures.

The pacing is a bit slow for me however, I think the editing could’ve been a lot tighter. It’s a small quibble however, as overall I think it’s a well worthy effort from Jones in his first feature film.
…

The Story of Luke

The premise is that Luke (Lou Taylor Pucci) has a is believed to be a form of autism, for the majority of his life he has lived with his grandparents, but his grandmother recently past. This leaves Luke and his grandfather (Kenneth Welsh) in the care of his aunt and uncle – who are reluctant to take care of them. The family is wealthy, but unhappy; it is rapidly unveiled that they are on the cusp of divorce. This new family dynamic is a rude awakening for Luke, but his grandfather provides him with a form of life direction for this new period in his life.

He goes on a mission to “become a man,” and the first step towards this is to get a job. His rationale is that once he gets a job, he will get a girl, become independent, and he will cease to be “special”. Luke wishes to accomplish this as fast as possible; Seth Green, who plays Luke’s first boss, embarks on this journey with him. Although they are afflicted with the same problem (yelling when overwhelmed, panicky, trouble with reading peoples emotions, etc.) they have completely different personalities.

The Story of Luke rapidly becomes a lesson on the trials and tribulations of life. Just like I Am Sam, many harsh realities are darkly comedic, dulling, in its own way, the how painful these types of disorders are (this movie is much more uplifting and uses a more stable camera). Lou Taylor Pucci appears to have been inspired by the Jack Sparrow/Raoul Duke/Johnny Depp character. Using intense eyes and matter-of-fact way of speaking, but it felt appropriate here.

This was a great choice for the second-to-last film of TCFF, I would definitely put it up there with The Sessions, in terms of quality, although the attendance wasn’t as spectacular. There is no rush to see this in theaters, but it couldn’t hurt.

…
Well, out of the 13 films I saw at TCFF, here are my top five favorites:

It’s funny that most of the films I love have musical themes in it, it’s not really a ‘requirement’ for a great film mind you, but hey, great music in an excellent film is definitely icing on the cake!

I don’t think you’d go wrong with any of these, so I recommend that you check these out when it’s released in your city. As for the two smaller films in the honorable mentions, I will add the info here when I learn about their release dates, whether on VOD or in theaters.
…

Well, that concludes my reviews of TCFF films this year. It’s been a blast covering for the film fest, thanks everyone for reading and commenting!

Let me know your thoughts on any of these films above.