I haven’t visited impawards site in a while but I’m glad I did so today. How have I not heard of this film before?? I mean, hello Col. Brandon and Mr. Darcy… I mean, these are two of my all time favorite period drama heroes!! 😉

So what’s Gambit about? Now, you comic-book fans out there might think of the X-Men character, but no, it has nothing to do with that. Here’s the synopsis from Orange.com:

Private art curator Harry Deane (Colin Firth) devises a finely-crafted scheme to con England’s richest man and avid art collector, Lionel Shabandar, (Alan Rickman) into purchasing a fake Monet painting. In order to bait his buyer, he recruits a Texas rodeo queen (Cameron Diaz) to cross the pond and pose as a woman whose grandfather liberated the painting at the end of WWII.

It’s described as a crime-comedy. Now, another thing that piqued my interest is that the screenplay is written by the Coen Brothers, who specializes in this kind of genre. But this time they’re not directing the movie, instead, it’ll be Michael Hoffman (One Fine Day, The Last Station) doing the directing duties. The story is a remake of the 1966 movie of the same name with Michael Caine as Harry. I don’t know how many remakes the Coens have done in the past, I think The Ladykillers and True Grit were remakes, but I’ve only seen the latter and that was one of my top 5 movies of 2010.

See my first paragraph. Obviously the two male leads Alan Rickman and Colin Firth sold me already on this movie. But add the always excellent Stanley Tucci and this automatically becomes a run-don’t-walk-to-the-theater kinds of flicks. But Cameron Diaz?? Heh, can’t say I’m enthused about her casting… but I’ve got to admit, she’s got good comedic skills, case in point: Something About Mary, and I totally could see her as a Texas rodeo queen. Besides, it could be worse… Jennifer Aniston was considered for the role of PJ Puznowski. 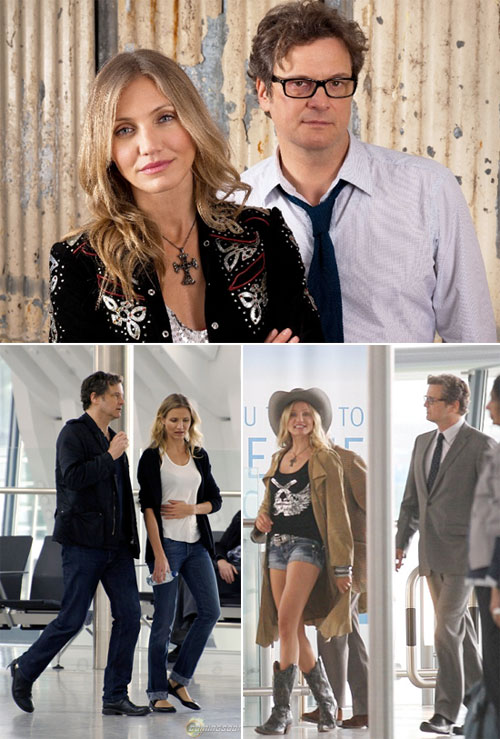 Looks like the pics above are snapped at Heathrow Airport. Boy, even at 40 Diaz’s still rockin’ those daisy dukes! I like the fact that the movie is filmed on location in London. No Rickman in sight though, but no matter, I just have a good feeling about this one. With the Coens’ script, this seems poised to be quite an entertaining caper comedy.

Now the bad news… for us in America anyway…

According to Cinemablend, Gambit has been pushed back by CBS Films from October 12th of this year to a mysterious time in “Winter 2013.” Not sure why that is, but apparently the studio is placing Martin McDonagh’s Seven Psychopaths in its slot. Looks like my UK friends are the lucky ones as they still get to see it this year on November 21.

The trailer is now here!

Man, now I’m even more excited to see this!

Thoughts on this movie folks? Are you going to see this one?