Happy Monday all [well Tuesday to some of you on the other side of the world]! I have to say this has been a great week for movie watching. I actually managed to see THREE new movies [well new to me] and even sneaked in a couple of older movies for a rewatch: 300 and Spider-man 2 [I guess I was in a Spidey mood]. Well, I’ve posted my review The Amazing Spider-man last night, which according to Box Office Mojo made $140 mil in six days, but believe it or not it still falls short compared to the Sam Raimi’s versions. But it’s obviously lucrative enough to warrant multiple sequels, I think a trilogy should be a given.

Now, here’s my mini reviews of the other two films I saw this weekend. 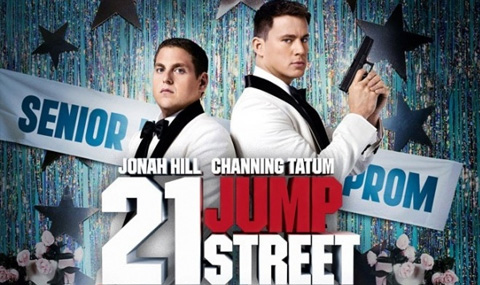 I used to watch this show in High School so the primary reason I watched this is pure nostalgia. I didn’t want to see it on the big screen as I wasn’t crazy for the main cast [Jonah Hill and Channing Tatum] but the overwhelmingly positive reviews definitely compelled me to rent it. Well, this movie had me in stitches from the start and it never let on.

The premise is simple enough. Morton Schmidt (Hill) and Greg Jenko (Tatum) are former high school foes, it’s the stereotype of the school jock bullying the nerdy academic. As fate would have it, the two ended up enrolling in the same police academy and become unlikely friends. Though at first they seems to have caught a break when they busted some drug dealers in an unassuming park, the two over-eager young officers forgot to read the Miranda right! As punishment, both are reassigned to a special division in that famous street address which turns out to be an abandoned Korean church. 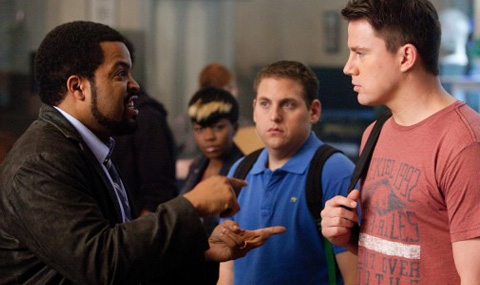 The foul-mouthed Captain Dickson (Ice Cube) told them their first mission is to infiltrate a high school following a death of one of the students after consuming a potent synthetic drugs. They go undercover as brothers and live temporarily in Schmidt’s parents house. Tatum and Hill certainly have comedic chops and just seeing both of them together just makes me laugh. Despite Tatum being soo much more mature than most high schoolers, they somehow managed to blend in and make friends. An accidental switcheroo in their faux-identity puts both undercover cops in unlikely situations, Jenko hangs out with the nerdy crowds, whilst Schmidt hangs out with the cool crowd, including the lead drug dealer Eric (Dave Franco, yep James’ younger brother).

Preposterous and crazy situations are to be expected in a story like this, but hilarity ensues with every step to get to the drug supplier. One of the most hilarious moments happens when the undercover duo had to try out the drug to prove themselves to Eric. Oh my, I was in stitches through that whole scene, but I was on the floor when they arrive in prom complete with flying white doves!! Believe it or not, there are actually some sweet moments between these two, but mostly it’s just non-stop laughter and fun right up until the wild and deliberately overblown finale. Both Jenko and Schmidt did get their wish of a life filled with car chases and explosions after all! 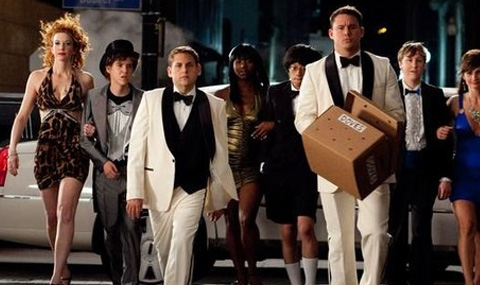 By the way, I don’t think I consider it a spoiler to say I’ve been waiting to see Johnny Depp’s cameo and you know what, he did not disappoint! I practically screamed when I saw him and I didn’t see it coming, which adds to the experience.

Final Thoughts: What fun! Despite being too vulgar for my taste, the writing makes for a truly hilarious action-comedy. It’s similar to Hot Fuzz but perhaps more accessible to US audiences. I’m can’t say that I’m a fan of Jonah or Channing now, but I can honestly say they both are GREAT in this movie! 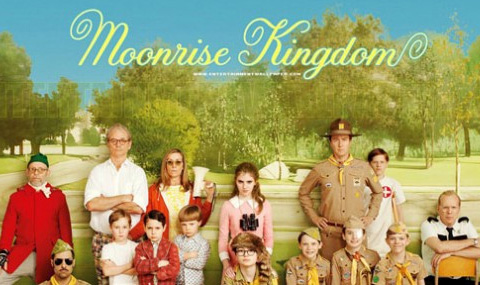 I’ve been waiting to see this one in a while (I even put it on my most-anticipated list), which is unusual as I don’t always get excited about a Wes Anderson movie. The only one I have seen before was The Royal Tennenbaums, and whilst I enjoyed that one, I can’t remember too much of the details except to say that and eccentric are the words that come to mind. It’s the same with Moonrise Kingdom, though I’d add the words endearing and delightful to describe it.

Set on an island off the coast of New England in 1965, it opens in a Khaki Scout Summer Camp on the day one of its member, Sam Shakusky, disappears from the camp. Soon they realize that a young girl from a nearby town, Suzy Bishop is also missing. Soon they discover the two had run away together and the town, led by the island police Captain Sharp goes in search of them. 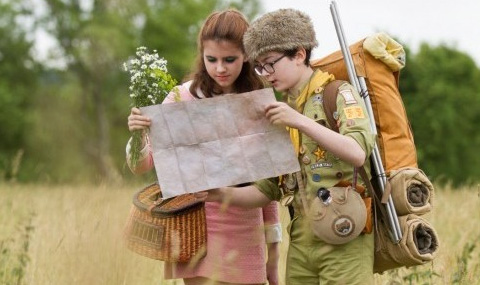 Sam turns out to be an orphan whilst Suzy is not, but both Sam and Suzy feel like an outcast in their respective circle, and that’s what drew them together. The young actors, Jared Gilman and Kara Hayward are so endearing in their roles, and their lack of acting experience actually adds sincerity to the romance. Their scenes together remind us the delight of what innocent young love could be. These sweet moments are peppered with some dark, poignant moments, as if to illustrate the world that would await the two twelve-year-olds as they grow older.

The adult actors seem to take a back-seat to these young lovebirds, but it doesn’t mean they don’t have their moments. Edward Norton as Sam’s Scout Master is amusingly delirious to what’s happening, and seeing the usually-serious actor as a chain-smoking boy scout leader is entertaining in its own right. Bruce Willis proves once again he’s more versatile than people give him credit for. I like him in his understated roles as much as his ‘yippikaye’ bad-assery and he’s appropriately somber in this one as he secretly longs for a family to call his own. I feel that Bill Murray wasn’t given as much to do here, he’s sort of just playing his quirky-self, but I guess that works just fine in a Wes Anderson movie. The rest of the stellar cast, including Tilda Swinton, Frances McDormand, Harvey Keitel and the other one of Wes’ muse Jason Schwartzman, are all good but none of them particularly stood out to me. 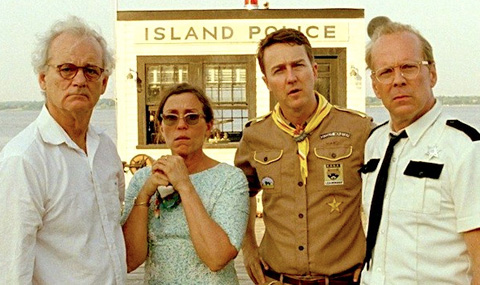 I guess the benefit of not having seen too much of Wes’ work is that I haven’t grown accustomed to his particular style, so everything seems fresh and fascinating to me. Even the preposterous aspects and the zany-ness of the characters all add to the charm and what makes Wes’ work so unique. There’s also that particular look to the visuals of Wes’ film, my super astute friend John outlined in this *tutorial* post…  he described Wes’ films as having “… the aged look and feel.. What I’m referring to is the yellow filter, and the slight graininess that makes you, the viewer, feel like you’re in a theatre in 1970 watching a film.” I LOVE that, I think it adds something special to the whole experience.

Final Thoughts: This is a delightful movie and it’s moving along quite efficiently at only 1 hr 34 minutes. The ending is heartwarming and sweet, but never nauseatingly so. I might rent this again when it comes out on DVD. I might even venture into Wes’ other works, such as Rushmore and Life Aquatic. Whether Wes’ style is your cup of tea or not as creativity is so subjective, I’m glad there’s still a filmmaker who marches to the beat of his own drums like him in Hollywood.

What do you think of either one of these movies? Do share your thoughts in the comments.