The worst thing about the Man of Steel movie is how long the wait it. The movie isn’t scheduled to arrive until June 14, 2013. Bah, that’s a year away, so right now, I’d be happy if I’d see a trailer, which will likely arrive around Comic-Con in two weeks, yay! I’d love to see if the rumor about the Kryptonian war possibly playing a big part in the movie (per GeekTyrant) is true or not. Is that why they hired Maximus as Jor-El? 🙂

Anyway, we’re here to talk about the music and this post was sparked by the news I heard last week that Hans Zimmer will be scoring the Zack Snyder’s movie. Now, with Christopher Nolan being one of the producers, I guess I shouldn’t be surprised by Zimmer’s involvement. Zimmer’s worked on four of Nolan’s movies: all three of the Batman films and Inception.

I’m a big fan of the German’s composer’s work, as I’ve outlined in my top five list from last year. He’s certainly done a lot of great scores in the past, but even a composer of his caliber should realize the daunting task ahead of him. In this FirstShowing article, he’s quoted as saying

You are allowed to reinvent, but you have to try to be as good or at least as iconic and it has to resonate and it has to become a part of the zeitgeist. That’s the job.

So he obviously realized that with John Williams has created one of the most iconic scores in the history of cinema, at least as far as superhero movies are concerned.

In last year’s Hero Complex Film Festival, Donner talked about how he got to work with John Williams, which was recommended by Steven Spielberg. It’s interesting how that came to be as Williams initially wasn’t available due to another project (it might have been Close Encounter of the Third Kind), so Jerry Goldsmith, who scored Donner’s The Omen, was hired. But then the schedule was pushed back again and Donner lost Goldsmith, but Williams became available. Talk about fate, eh?

Upon hearing the Superman theme for the first time, he said he was thunderstruck. “I couldn’t believe it, tears to my eyes…” Donner told Geoff Boucher, “He’s a genius, he’s a genius.” Donner even said in the interview that if we listened to the music very carefully, it’s almost as if you could hear the music say the word Superman. It’s like the music itself has superpowers! 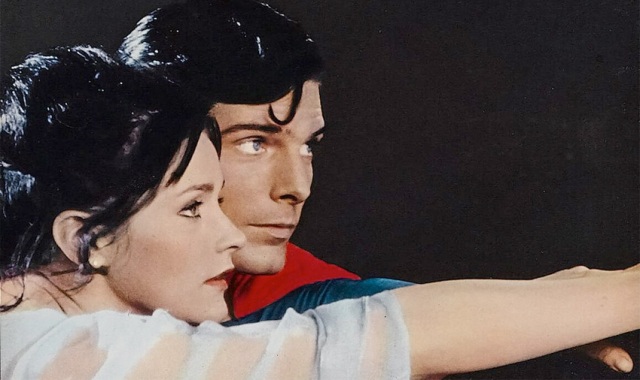 I also adore the LOVE THEME of Superman which has romantic and sweeping feel to it, but still as majestic as the main theme. The Can You Read My Mind sequence is just hard to top, with Margot Kidder reciting the lyrics… she pretty much sums up how every young girl feels watching that scene, wishing it was us in Lois’ place 😉

Now, even though I think Zimmer is brilliant, I really don’t know how anyone could top that score. I feel that I think Snyder and Nolan should somehow keep the March theme, at least during Superman’s first flying sequence. I mean, this score is practically as inseparable as James Bond’s theme with 007 movies. I know Bryan Singer did use part of the score in Superman Returns, so it’d be weird to see Superman flying without that iconic score.

So what say you folks? Do you think John William’s Superman theme should be use in Man of Steel? Let’s hear it.