It’s nice to see a film you’ve been anticipating actually meets your expectation. I’ve been waiting to see The Debt for quite a while, and when Miramax studio was shut down by Disney last January 2010, I feared that this movie would’ve gone straight to DVD. Fortunately that wasn’t the case, so as soon as the film was released here, I went to see it on opening night. 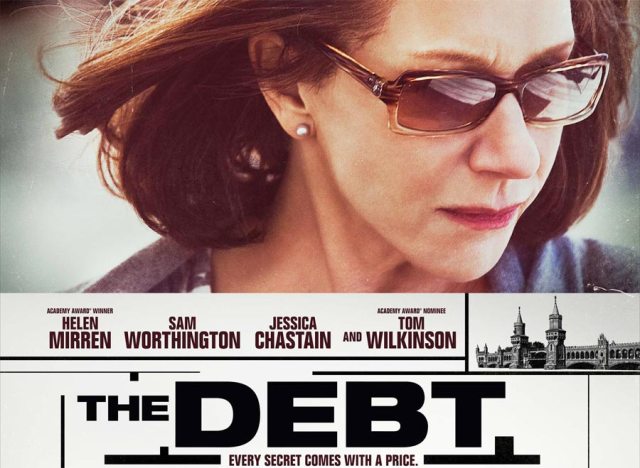 I love the fact that they put Dame Helen Mirren front and center on the poster, that definitely appealed to me because she is an actor I admire and also because I always love to see a strong female protagonist on film.

The story takes place in flashback mode in the year 1965, when three young Israeli Mossad agents were sent on a secret mission capture and kill a notorious Nazi war criminal. Thirty years later, a man claiming to be the very same Nazi surgeon Dieter Vogel has surfaced in the Ukraine and the former agents must figure out what to do with such revelation that threatens their current reputation. 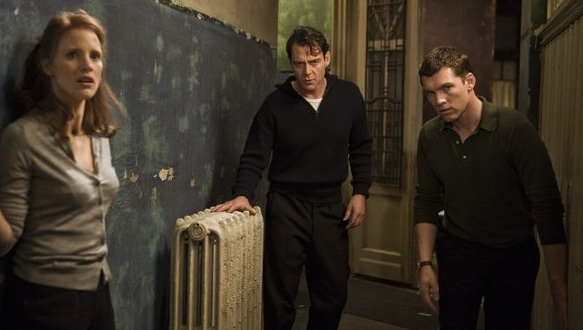 Moviegoers have seen a fair share of Nazi thrillers to date, but I’d say The Debt has got something different to offer and British director John Madden’s direction keeps the suspense going right up until the end. Even the more mellow moments when they’re holding the criminal captive, the tension doesn’t let up. The look of the movie is gritty and realistic, and the younger actors capture that sense of dread and anxiety convincingly.

It’s especially interesting to see three pairs of actors playing the older and younger versions of the same character: David Peretz (Ciarán Hinds/Sam Worthington), Stephan Gold (Tom Wilkinson/Marton Csokas) and Rachel Singer (Mirren/Chastain). Despite Worthington not resembling Hinds at all, it didn’t really matter in the end as the actors did a good job keeping the integrity of the characters. 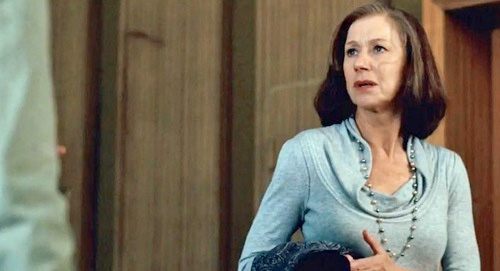 Apart from Mirren, the younger actors had more to do in this film as they carry out their mission. The retro scenes were full of edge-of-your-seat moments, especially the scenes in the hospital. I’m not undermining what the two male agents did, but really, Rachel no doubt has the most difficult assignment out of the three, pretending to be a patient of the guy they’re trying to capture who’s working as an gynecologist (’nuff said). Danish actor Jesper Christensen as the sinister Vogel is evil through and through, right up there with Amon Goeth in Schindler’s List.

There is a bit of an unrequited love story interwoven into the espionage plot, but it actually serves the story, so it isn’t just there for the sake of softening things up. I really feel for the characters and I’m glad to say that Worthington is actually more expressive than I’ve seen him in previous films. The rest of the cast are excellent all around, especially Mirren in the last 20 minutes or so. The last scene was brilliantly filmed as Madden kept us guessing for what about to unfold. Let’s just say the film ended with bang that made me jump out of my seat. As I’ve mentioned here, this is the first time I saw Jessica Chastain on screen and I must say I’m quite impressed with her. I look forward to seeing her other movies, which are quite a few in this year alone: The Help, Tree of Life and the upcoming Shakespeare adaptation Coriolanus.

I highly recommend this film for anyone, even those who normally isn’t into Nazi thrillers like this. The violence are unflinching at times but not overly gory. The story itself is intriguing and the dialog is sharp and intelligent, which is no surprise considering it was written by Matthew Vaughn and Jane Goldman (Kick Ass, X-Men: First Class). I don’t even mind renting this one again when it’s out on DVD. It’s not every day I come across a solid espionage thriller that’s as taut and well-acted as this one.

Have you seen this film? I’d love to hear what you think.

36 thoughts on “FlixChatter Review: The Debt”