Hi all, can I just say for the record that I LOVE Twitter!! I get most of my news from there and it keeps me informed even when I’m out and about on holiday… and in turn I can also inform folks of what’s going on right at that very second something is happening (i.e. when I was at Comic-con). Ok now, before you accuse me of working for Twitter, I just wanna highlight three brand spankin’ movie updates that are worth a look. 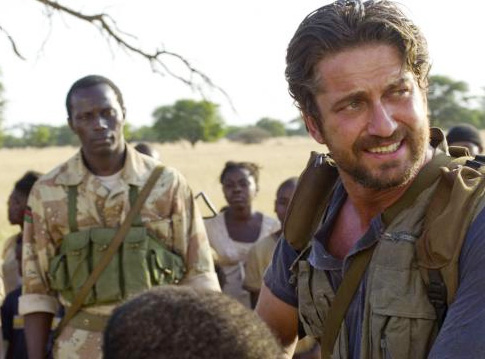 I can’t believe it’s been exactly a year ago that I posted these behind-the-scene photos of Gerry Butler on the set of Machine Gun Preacher, and we still haven’t got a trailer!

The only official thing they’ve released is this photo of him in Africa as Sam Childers, the former drug-dealing biker tough guy who found God and became a crusader for hundreds of Sudanese children who’ve been kidnapped and pressed into duty as soldiers in the Lord’s Resistance Army. The story is based on Childer’s autobiography, Another Man’s War: The True Story of One Man’s Battle to Save Children in the Sudan, and Butler has personally met with the preacher and both of them are promoting the film together, I posted a photo of both of them here.

I found the photo from USA Today, in which Butler described Childers as ‘a guy of our times.’ “There is more complexity in a modern-day character who’s a drug addict and a biker turned businessman, missionary and soldier. You don’t get roles like this very often,” the actor said. Director Marc Forster (Finding Neverland, Stranger Than Fiction) explained his rationale for picking Butler to portray the flawed hero, “He’s one of those movie stars today that I feel is a real man. There are very few around. He has this incredible rawness.” I absolutely agree! I know a lot of people doubt Butler’s talent as an actor but I feel that this year is his moment to shine and prove those people wrong.

I’m also happy to report that both his films Coriolanus and this one will premiere at Toronto International Film Festival (TIFF) starting September 8th, you can see the full program here. According to the film bio, Machine Gun Preacher runs 123 minutes and Butler also serves as executive producer. This film opens on limited release on Sept. 23, hope it’ll open nationwide not too long after that.

This is another film that’ll premiere at TIFF. It stars the ubiquitous Michael Fassbender as a New York man who’s confronting his sexual compulsions and the self-destructive acts of his sister (Carey Mulligan). This is his second collaboration with Hunger director Steve McQueen (the British filmmaker, not the famous classic actor).

Check out the photos below courtesy of SlashFilm:

As you know, I like Fassbender and he’s really on a roll right now. Obviously Hollywood loves him and he’s in the right age where there are tons of roles available to him. It’s great to see him maximize his versatility to the fullest, playing anywhere from a superhero villain in X-Men: First Class, a historical character Carl Jung in Dangerous Method, a bad ass spy in Haywire and now this. I also admire Carey Mulligan after seeing her in An Education and Never Let Me Go. The subject matter isn’t very appealing, but depending on the trailer and reviews, I’d be willing to give this one a shot.

I had never even heard of this one until I saw this trailer today.

Woof! That looks mighty intense. On initial viewing, it kinda reminds me of Wall Street + The Insider and seeing Demi Moore there, a bit of Disclosure. I always appreciate a smart, taut thriller and this one certainly looks promising I’m not good at all with numbers though, so there’s a chance the plot might go a bit over my head.

The ensemble cast is impressive: Zachary Quinto, Kevin Spacey, Jeremy Irons, Stanley Tucci, Simon Baker, Paul Bettany, Penn Badgley, and Demi Moore. Ok so I’ve never seen anything Badgley does so he’s probably the only odd man out in this list. I had just seen Tucci in Captain America, and he’s always excellent despite his brief appearance, so he probably will be just as compelling here. Spacey seems to be drawn into ‘office’ type roles lately, I see him in business suits an awful lot, whilst Jeremy Irons seems to struggle with his American accent. He always sounds like Jeremy Irons no matter what movie he’s in 🙂

I find Quinto to be the most interesting one to watch here, he’s definitely the most promising actor out of NBC’s Heroes. FirstShowing said this movie is one of his favorites from Sundance, “…a dramatic thriller that does put you on the edge of your seat while waiting to see how everything plays out on the eve of a financial meltdown that we’re all very familiar with. Not only is it timely, not only is it entertaining, but it’s just riveting to watch.”

A good thriller doesn’t always need to have a car chase or shootout in it, it’s the impact of what a certain discovery might bring that puts you at the edge of your seat.

Does any one of these interest you, folks? Anyone going to TIFF this year?