I finally got around to seeing Miller’s Crossing this past weekend, but instead of my usual Weekend Roundup, I decided to review another gangster movie that I’ve been wanting to do for quite a while. Both of these films are set in the Prohibition era of the early 30s, starring two laconic anti-heroes. Interestingly, both also feature a distinct cinematography that is pivotal to the quality of each film as a whole. Despite the similarities though, these are two very different films in their own right. 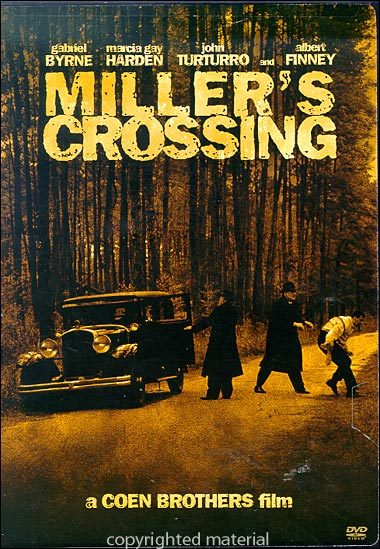 This is what a gangster noir genre looks like in the hands of the Coen Brothers (directed by Joel, produced and written by both Joel and Ethan). The film focuses on Tom Reagan, an ‘brains over brawns’ adviser to a crime mob boss Leo whose loyalty is divided between Leo and his rival Caspar as the two gangs vie for control over the city.

The main conflict revolves around a crook named Bernie (whom Caspar called ‘Schmatte’ which is a Yiddish term for a worthless man). Caspar wants Leo to kill but because Leo’s in love with Bernie’s sister Verna, he refuses to do so. Caspar is furious over this, and Tom advises Leo not to risk a gangster war over a woman. Things gets complicated when Tom ends up bedding Verna and gets right in the middle one double-crossing scheme after another.

This genre isn’t my cup of tea, but I was compelled to see this as I’m curious to see more of the Coens’ work after seeing True Grit. Plus, this one stars one of my fave Irish actors Gabriel Byrne. I wasn’t disappointed and Byrne is indeed perfect as the forlorn protagonist with his smoldering eyes. The guy is born to wear a fedora and he looks fantastic in those retro overcoats. I’m also glad this isn’t as bloody as I had thought (for a gangster flick at least), but I’m not saying it’s not suspenseful. In fact, there are lots of edge-of-your-seat moments throughout, especially the scenes at the Miller’s Crossing forest. Another memorable scene takes place in one of the mobster’s house, during which a relentless machine-gun shootout is set to a sentimental Irish ballad ‘Danny Boy.’ It sure is an effective technique that enhances the impact of the scene. It reminds me of a scene in John Woo’s Face/Off where the soothing ‘Somewhere Over the Rainbow’ is playing during a vicious gun-battle scene. Finney was all bad-ass in that scene, wow… “The old man’s still an artist with a Thompson,” one guy quipped. Indeed.

As for Byrne, a lot of people say this is one of his finest work and I have to concur. He’s the ‘moral’ center of the movie though he’s not exactly a moral man with his drinking and gambling addiction practically driving his actions. But he’s a complicated man, which makes him a perfect anti-hero. Nothing is clear cut for him, and he’s in constant contemplative mode and remains an enigma ’till the end. Byrne imbues Tom with such cool charisma in virtually every scene he’s in, but his character is one that is hard to love, even if one can’t help but feel for him. John Turturro (Bernie), Jon Polito (Caspar), Marcia Gay-Harden (Verna) and Albert Finney (Leo) are all excellent, but it’s Finney that I think are particularly notable.

This is a movie I’m certain I won’t watch again because it’s just too bleak and cold for my taste, but it’s more than worthwhile just to see Byrne in his best performance. I do appreciate the way the story is told and the dialog is witty and peppered with amusing black humor, as to be expected from the Coens. As I said before, the cinematography by frequent Coens-collaborator Barry Sonnenfeld is also worth checking out. That fedora blown in the wind at the start of the movie is pretty iconic, though upon further reading, it’s just a style the Coens like, there’s no hidden meaning behind it.

There are many stories about Michael Sullivan. Some say he was a decent man. Some say there was no good in him at all. But I once spent 6 weeks on the road with him, in the winter of 1931. This is our story. 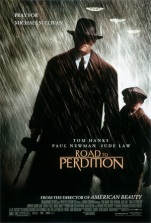 I saw this months ago, but somehow I still remember much about it. Road to Perdition is based on a graphic novel by Max Allan Collins, about a hitman named Michael Sullivan. Like Tom Reagan, Mr. Sullivan is an intelligent man of few words whose loyalty is tested. He sees his crime boss John Rooney as a father figure, but things take an unexpected turn after his eldest son inadvertently witnessed a cold-blooded murder done by Rooney’s son, Connor. Unable to convince Connor that he and his son would keep the matter confidential, Sullivan is forced to flee with his young son on a quest to avenge the very people he once held dear.

There is a parallel father-son theme going on in the movie, one between Michael Sullivan and Michael Jr., and the other between John and Connor. Both Sullivan and Rooney want to protect their respective sons. Their predicament is a direct result of what each of their son had done that brought them to this crossroads of life, of which there seems to be no escape.

British director Sam Mendes (American Beauty) did a smashing job creating a somber 1930s setting and he seems to have a thing for shots in the rain, which are beautifully captured by cinematographer Conrad L. Hall. This riveting drama grabbed my attention from start to finish and the unhurried pacing never let my attention waver. Mendes didn’t seem concerned with making a gangster flick with all the genre action stuff people expect to see, but instead he’s more invested in the characters that make the storyline so compelling. A lot of the violence happen off-screen, which goes to show that blood and gore aren’t always necessary to bring about terror on screen. Instead, Mendes relies on superb editing, camera work and music to create a heightened level of suspense throughout.

Whilst Miller’s Crossing looks pretty darn good, this one is amazing. Nearly every scene is frame-worthy, and Mendes seems to have a love affair with rain in his movies. The scenes set in rainy nights are magnificent, especially the street shootout scene towards the end, that perhaps is one of the most iconic rainy scenes ever filmed. It’s breathtaking for two reason: one – the eerie and powerful way the scene itself was shot; and two – the significance of that scenario for the characters involved.

The performances are brilliant. Mr. Sullivan is played with moody perfection by Tom Hanks. I’m not used to seeing Hanks playing such an amoral man, but he’s quite compelling here in what I believe is one of his understated yet astounding performances of his impressive career. Paul Newman is well, Paul Newman, the classy actor who always adds gravitas to everything he’s in. Even though he’s the mobster boss, he’s not a heartless man. In fact, he genuinely cares for the Sullivans and his grief over the whole situation is apparent. The Brits make up the bad guys in the movie: Daniel Craig as Connor and Jude Law as a crime-scene photographer/hitman hired to kill the Sullivans. Both are very effective and convincingly evil in their roles. In fact, Craig here is as far away from the suave and charming Bond as one could get.

I somehow saw the ending coming, but still it’s heart-wrenching yet satisfying. It ties up nicely to that quote that opens the movie and offers a bit of hope to Michael Jr. that he won’t follow in the footsteps of his father. This is one gangster movie besides The Untouchables that I can say I don’t mind watching again. Even if this genre isn’t your thing, I urge you to see this. You won’t be disappointed.

Has anybody else seen these movies? I’d love to hear what you think of them.