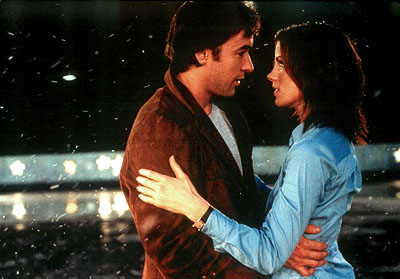 Greetings from New England, everyone! As it’s snowing last night in New Hampshire and we’re driving to New York City today, it makes me think of some great Wintry scenes in the Big Apple. Clearly the list is endless but for some reason one that I had in mind was the various Wintry scenes in Serendipity. It’s one of the more enjoyable rom-coms out there that still holds up with repeated viewings. Despite some of the inherent cliches and schmaltzy-ness, somehow John Cusack and Kate Beckinsale’s sweet chemistry just works. I didn’t even mind seeing Molly Shannon who’s kinda irritating at times as Beckinsale’s best friend. Jeremy Piven is pretty funny as Cusack’s BFF though, but one of the most enchanting co-stars in this movie is definitely the NYC setting.

From the beginning scene of their ‘meet cute’ during Christmas shopping (with Eugene Levy as the hilarious Bloomingdale’s salesman) all the way to the Wintry scene ending at an ice skating rink, New York City was nothing short of magical! No matter how cynical you are (and yes, you can predict the ending halfway through the movie), you’d be hard-pressed not to go ‘awwww’ watching these two finally being reunited with the gorgeous snowflakes all around them.

Well, what are your favorite Winter scene(s) in movies?