TCFF day 4 has come and went, and we’re about to close the 5-day film festival with FAIR GAME later tonight. Executive Producer Bill Pohlad will be on-hand at this red carpet event to introduce the movie at 7pm. Do you have your tickets yet? The online ticket sales is closed right now, but you may still purchase tickets at the box office before the show using cash or check.

I volunteered again all afternoon yesterday, doing various tasks such as passing out schedules at the ticket booth, tearing out tickets of people going into the screening, and handing out rush tickets (or stand-by tickets) of Secretariat to people who might be interested. It’s kind of expected that people are cautious about strangers handing out stuff in a public area, you practically see ’em as they walk toward you. The best you can do is put on the best smile you can muster and try to use the word ‘free’ or ‘complimentary’ in there somewhere 😀 A mother & daughter were actually looking to see a movie and had been interested to see Secretariat, so their eyes lit up when we gave each of them a rush ticket. That really made the whole thing worthwhile. 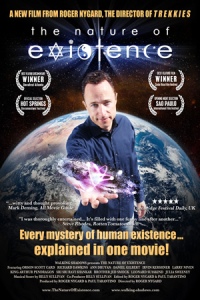 One of the two main features of Day 4 is The Nature of Existence, directed by Minnesota’s own filmmaker Roger Nygard, who did TREKKIES back in 1997. This time he took on a more spiritual/metaphysical quest by traveling the globe to interview various people and start by asking the biggest question: “why do we exist?” After a four-year world-wide odyssey beginning in 2005, he had over 450 hours of footage to boil down to an hour and a half worth of feature-length documentary. You can check out the reviews of this at RottenTomatoes. I ran into Mr. Nygard during my shift but as I was wearing my volunteering hat, I didn’t get a chance to ask him any question of my own. I personally would like to know if he had learned anything from this journey, and what his real motivation was in making this. At first glance it seems that despite its thought-provoking appeal, it’d probably raise far more questions than answer… which makes me think that the tag line in the poster (every mystery of human existence… explained in one movie) is nothing more than wishful thinking.

After my shift, I checked out Secretariat, the ‘horse movie’ as everyone calls it, which was a rousing good fun. I don’t know much about the subject matter, but I really enjoyed it. The movie was preceded by a short movie Flourtown, about a couple who search for a reason to live after their boys die, and make a surprising discovery in their own lives as artists. It’s a really beautifully-filmed short, created by William Slichter who uses his background in Fine Arts in his storytelling. Check out the trailer:

Another volunteer shift beckons, so watch for my review of Secretariat and Fair Game hopefully tomorrow. Stay tuned!